It rained the night before and so I decided to go for my macro-photography session in the morning instead. For this trip I decided to go to Upper Seletar Reservoir, partly because I have not been to the place for a while, and partly I wanted to avoid the usual morning crowd at popular nature parks like Windsor Nature Park.

Given that it has been raining for the past few days, I am mentally prepared that the trip would not be fruitful. Nevertheless, I proceeded with the trip as my main purpose is to test out my flash diffuser setup. Ever since I switched to the current Sony A6000 camera, I have not been noticing the flash hotspot in my photographs until the last trip.

Here's a surprise find at the place, a Whip Scorpion or Vinegroon. 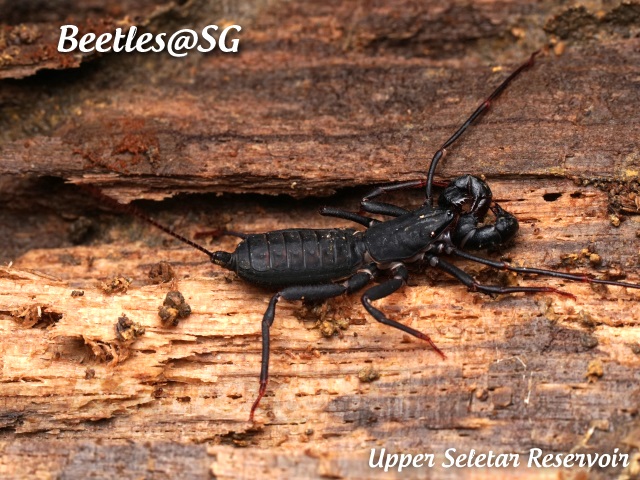 The first beetle was a Click Beetle (Synaptus filiformis) sheltering from the wet weather under a leaf. 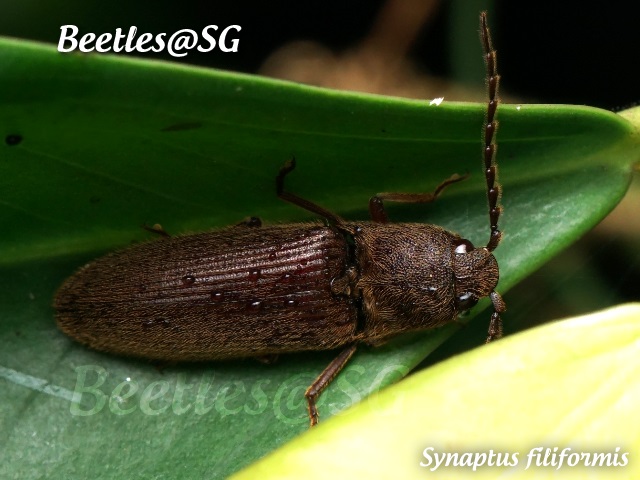 Some distance from the Click Beetle was a 3 mm Leaf Beetle. The vegetation at the place was dripping wet, as can be seen from the water droplets on the leaf. 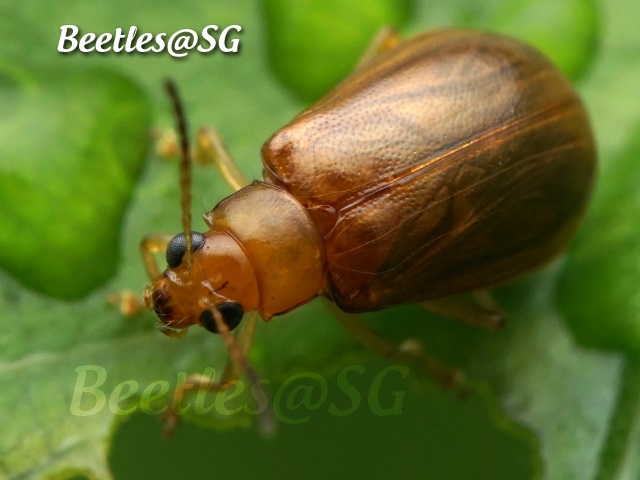 Near to the Leaf Beetle were several of this bright orange Leaf Beetle (Hoplasoma unicolor) feasting on their food plants. 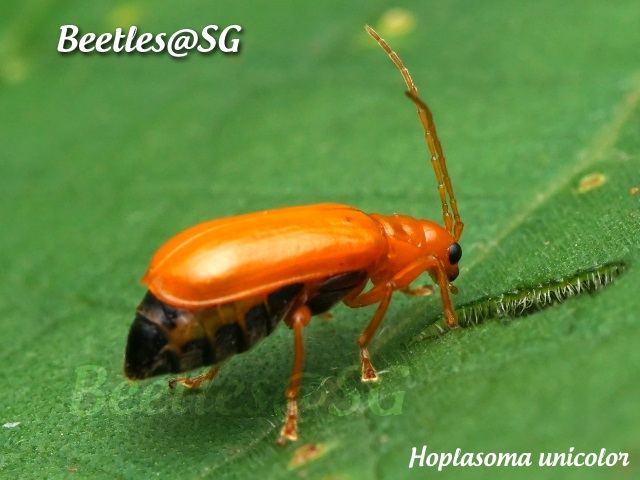 There were not many critters encountered due to the wet weather, and it was after a long while of walking before finding this 15 mm Pleasing Fungus Beetle (Triplatoma gestroi) resting on a rotten log. 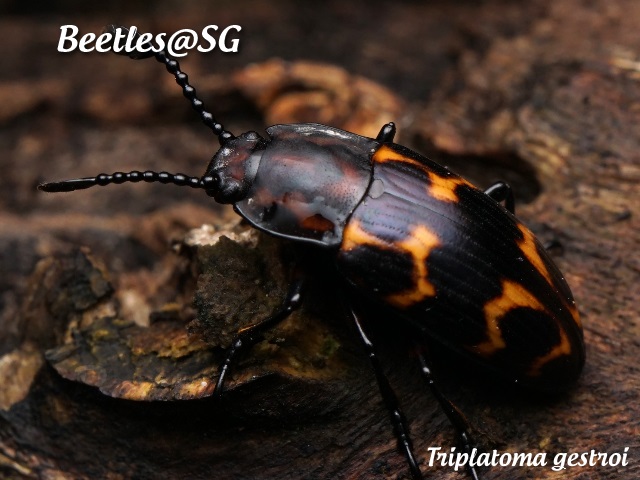 Near to the Pleasing Fungus Beetle was a low Singapore  Rhododendron plant (Melastoma malabathricum) where several of this 2 mm Jewel Beetle (Habroloma lepidopterum) were found on its leaves. 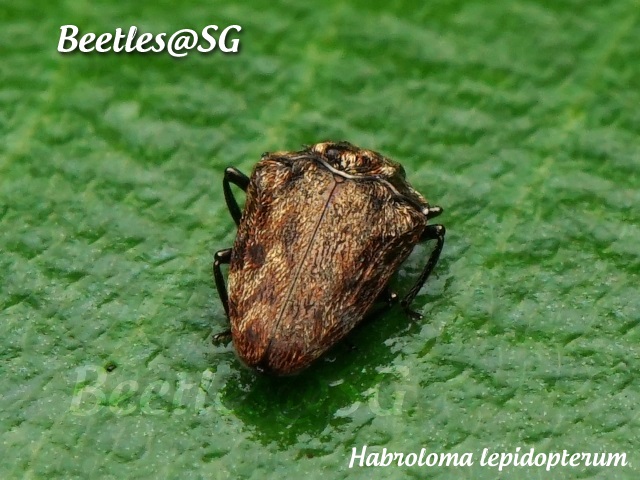 Next to the Jewel Beetle on the same plant was this lone Leaf Beetle (Argopus brevis) munching on a leaf. 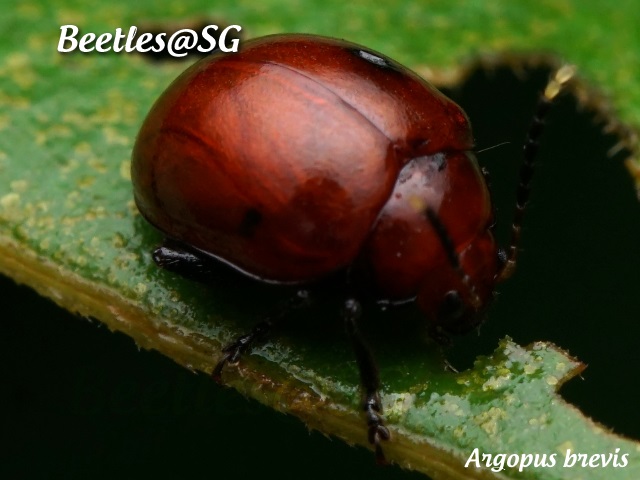 After walking for a while without finding any beetle, I decided to call it a day and turned back. Just when I am about to reach the place where I started off, a Tiger Beetle (Therates dimidiatus) flew right in front of me. It was very skittish and did not allow me to approach. Here's a "blown up" shot of the beetle for record purpose. 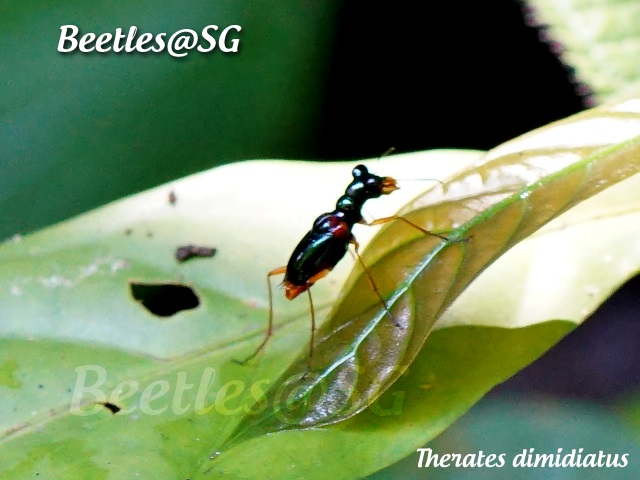 Near to the Tiger Beetle was a fallen log where this 10 mm Fungus Beetle (Eumorphus tetraspilotus) was on a Birdnest Fern growing on the log. 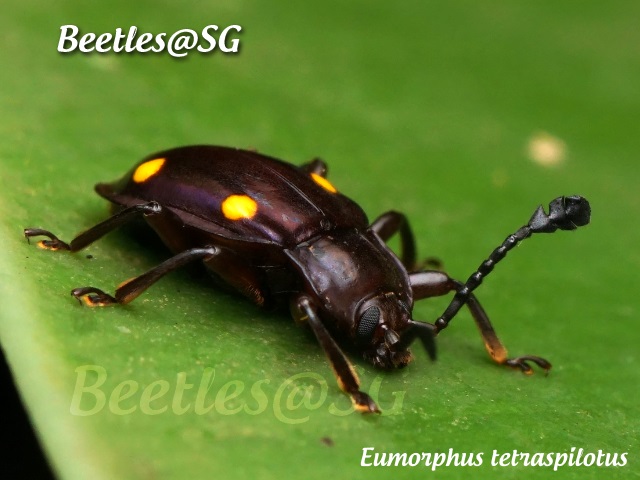 The last beetle for the trip was this Fungus Beetle (Stenotarsus pardalis) found on the underside of a rotten tree branch next to the fallen log. 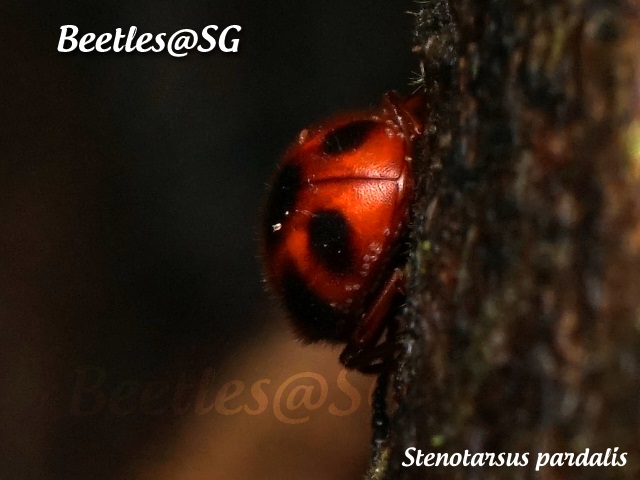 As expected this trip is not particularly fruitful but nevertheless I was able to test out my flash diffuser setup.
Posted by David Moh at 03:57 No comments:

For this week's session, we decided to take the Squirrel Trail and Venus Link instead of our usual Venus Loop route when we are at the Windsor Nature Park. Here's a bright green katydid nymph encountered during the trip. 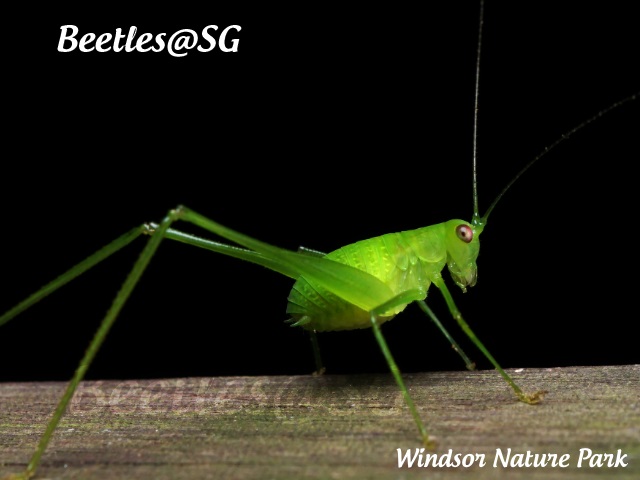 I was slightly earlier than HW and Reynard and so I decided to explore some of the spots around the car park. The first beetle that I encountered were these lovely Orchid Leaf Beetle (Lema pectoralis) feasting on a poor orchid flower. 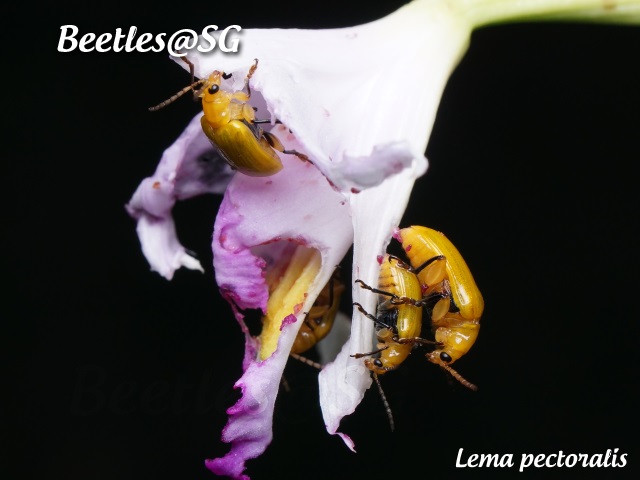 Near to the Orchid Leaf Beetle was a 3 mm Darkling Beetle hiding in a crevice in a small tree. 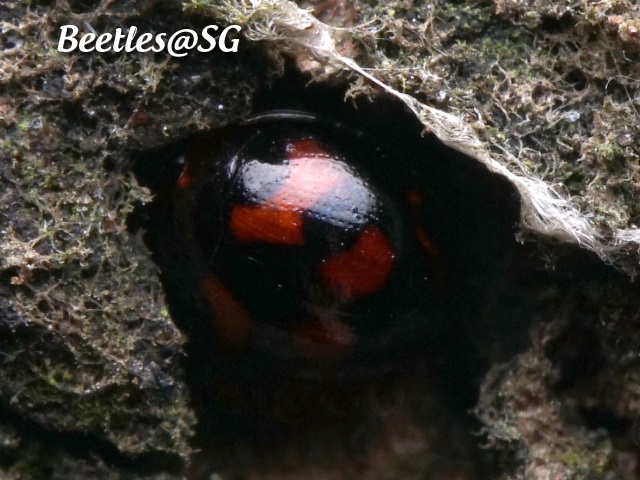 Just then HW and Reynard came and we started the trip with this larva of the Orchid Leaf Beetle, munching on a flower bud of an orchid plant. 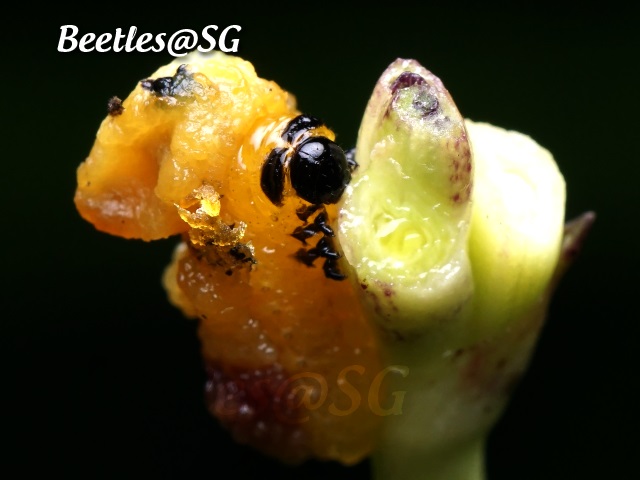 Moving down the trail, a commonly encountered Chafer Beetle (Apogonia expeditionis) was found on a fern. 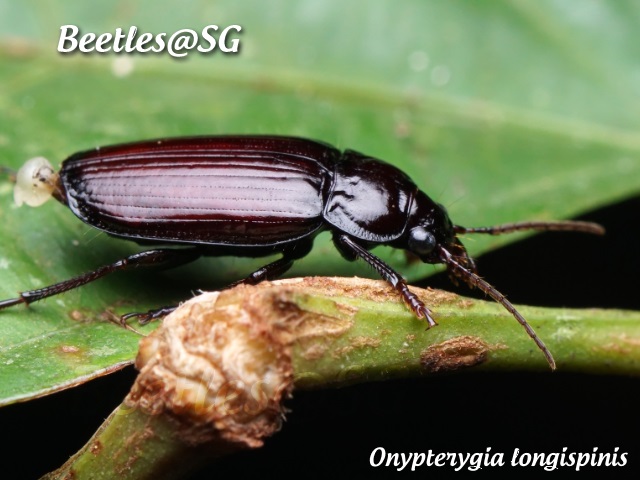 On a small tree further down the trail was this 8 mm Darkling Beetle (Strongylium tenuipes). 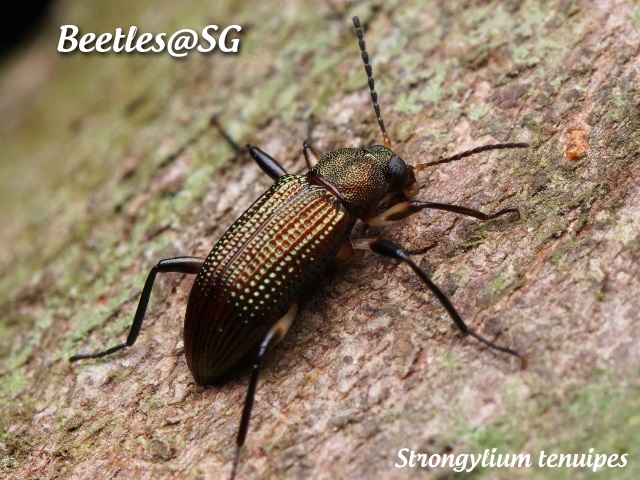 After walking for a while without finding any beetle, this 5 mm Darkling Beetle found by Reynard was a welcomed find. 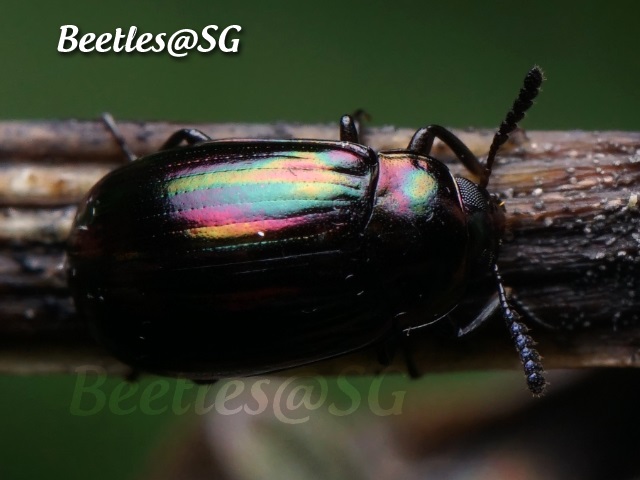 Across the path was this lovely colored Leaf Beetle (Hemipyxis semiviridis). I particularly like the deep green coloration of this specimen. 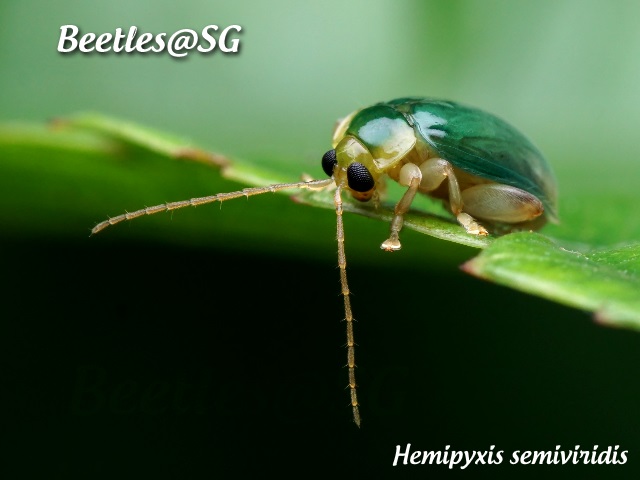 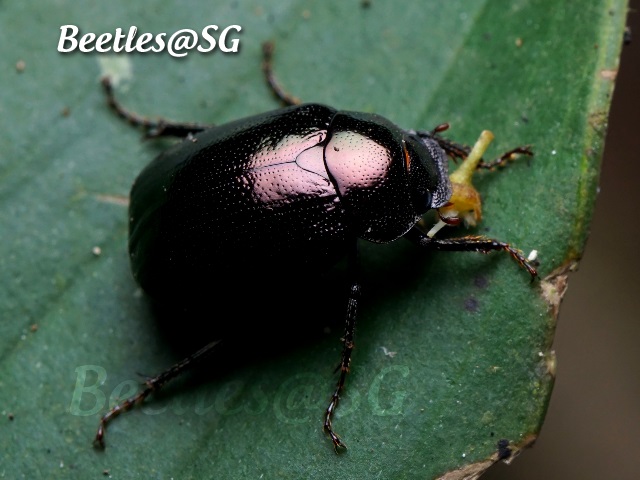 Coming to a fallen log, this Fungus Beetle (Eumorphus assamensis) was resting on a dead leaf. 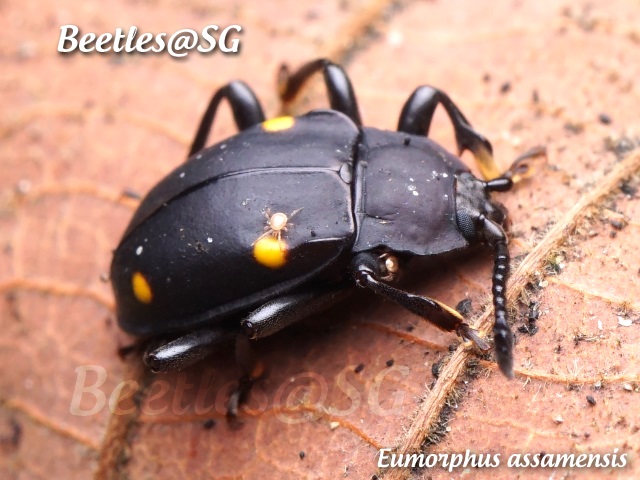 On the same log was a Darkling Beetle (Ceropria superba). 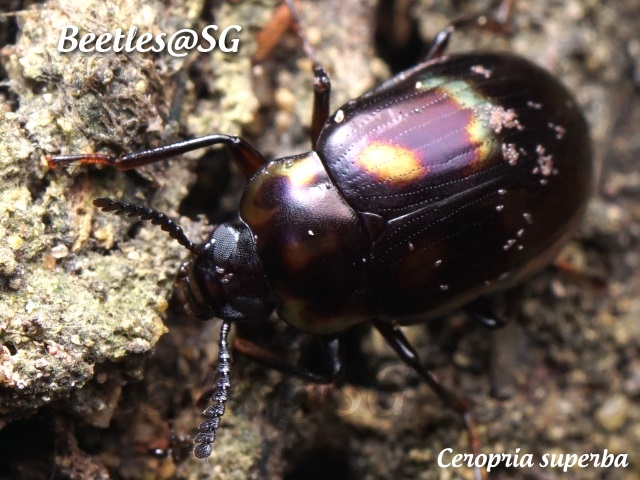 Diagonally across the trail was this lone Fungus Beetle hiding on a broken Bracket Fungus of a fallen log. 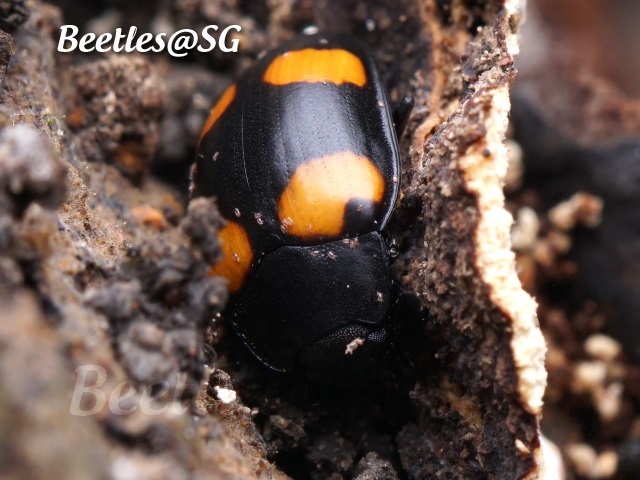 Next to the Fungus Beetle was this 4 mm Darkling Beetle munching on something on the log. 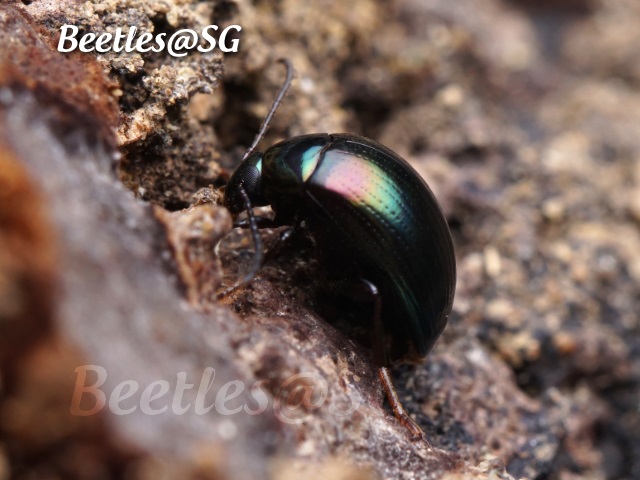 Moving on, this 10 mm Ground Beetle (Physodera eschscholtzii) was found on a small fallen log. 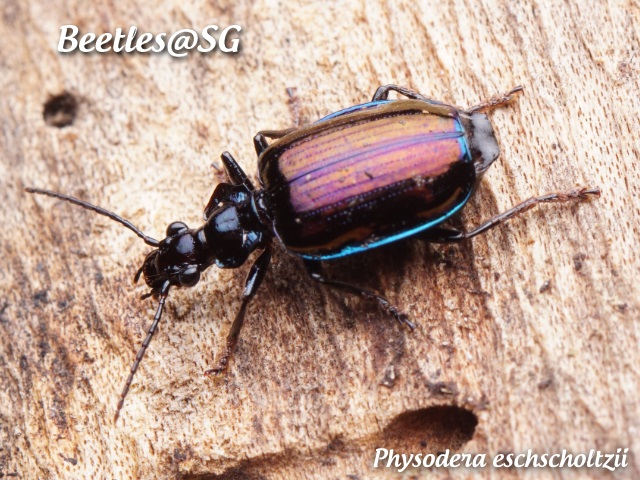 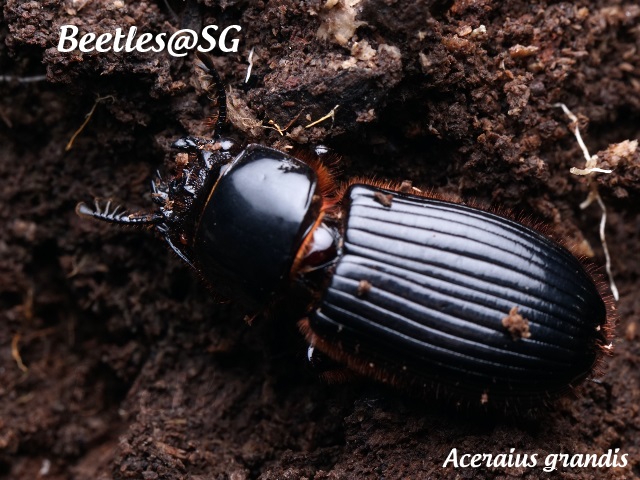 The last beetle for the trip was a long-time-no-encounter Fungus Beetle (Stenotarsus nobilis nobilis) on a small leaf. 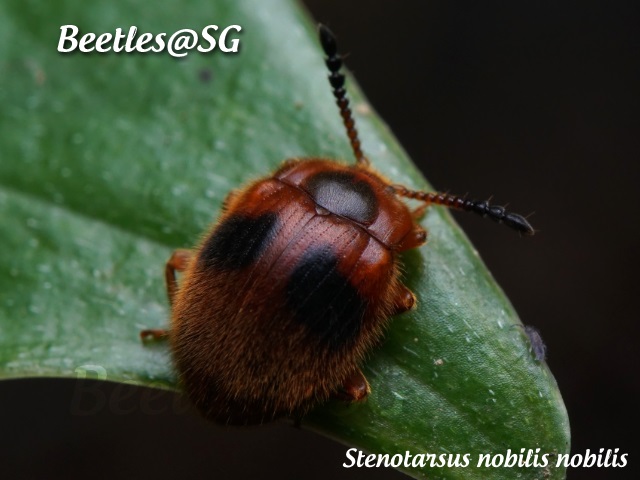 After the Stenotarsus nobilis nobilis Fungus Beetle, we entered the Squirrel Trail but sadly there was not a single beetle encountered along the way.

By the "standard" of Windsor Nature Park, this trip was not consider to be fruitful given the length of time that we were there. Nevertheless, I am still glad to be able to find so many Bess Beetles on this trip, not mentioning the encounter with a flying Firefly Beetle which unfortunately flew into the tree canopy when we found it.
Posted by David Moh at 21:05 No comments: