The weather in Singapore has been hot and dry for the past few weeks, as such I have not gone for any night macro photography session as the chances of finding beetles in such dry weather will be very slim. Thankfully it rained several times this week, so HW and I decided to go to Windsor Nature Park for a try.

The place was dry as expected but it was not bone dry, probably due to the rain earlier in the week. The good news was that vegetations were not withered as expected and they looked green and alive. The surprise find for the trip was the encounter of a large patch of luminous mushroom, which we didn't expect to find during this period of hot and dry weather. 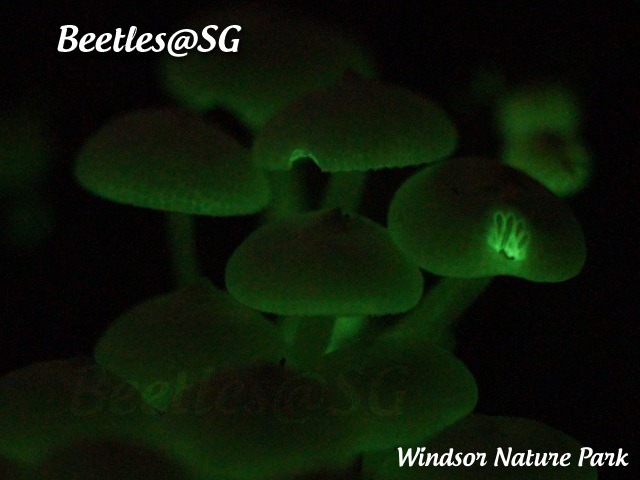 The first beetle encountered was a Fungus Weevil (Eucorynus crassicornis) found on a log that lined the area under reforestation. 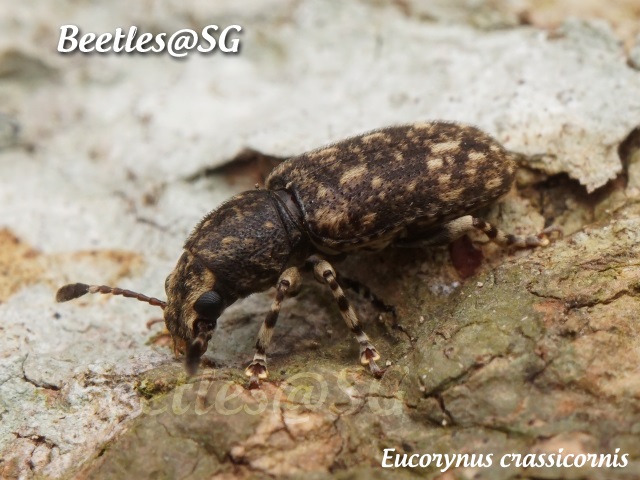 On another fallen log near by was a pair of commonly encountered Darkling Beetles. Notice how dry was the log that the beetles were on. 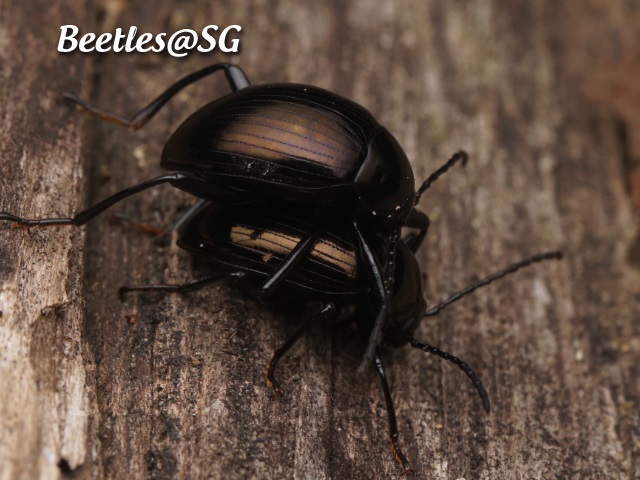 Next to the Darkling Beetles was a Tiger Beetle (Cicindela aurulenta) resting on a leaf. 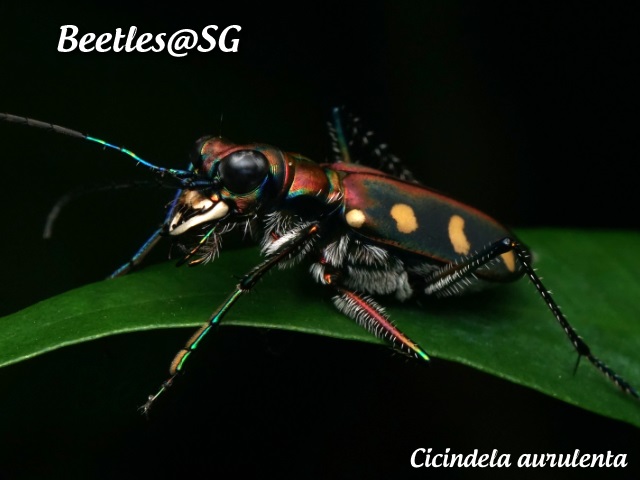 On a small tree nearby was a 5 mm Darkling Beetle. It is quite common to find similar looking Darkling Beetles, only differing in size which can range from 1 mm to 10 mm. 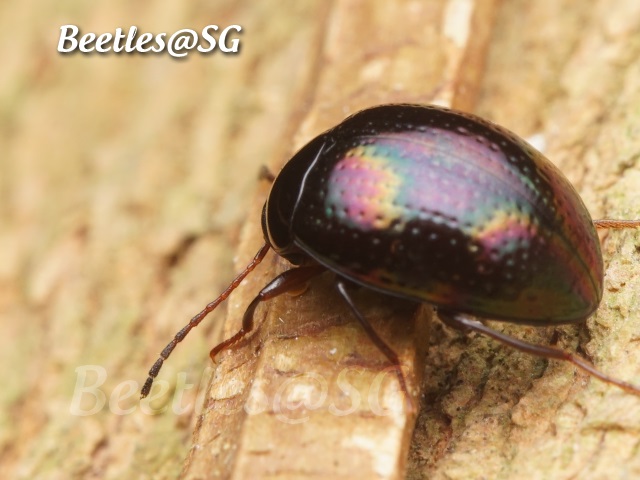 Walking further down the trail, a commonly encountered Chafer Beetle (Apogonia expeditionis) was found resting on some leaves. 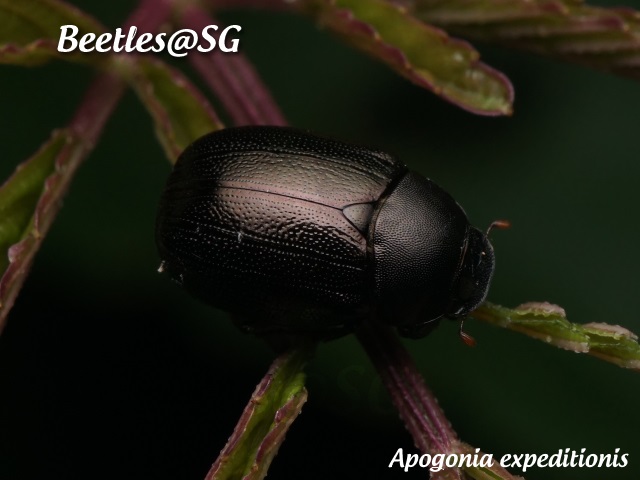 On a small tree nearby was this 2 mm orange color Fungus Beetle. 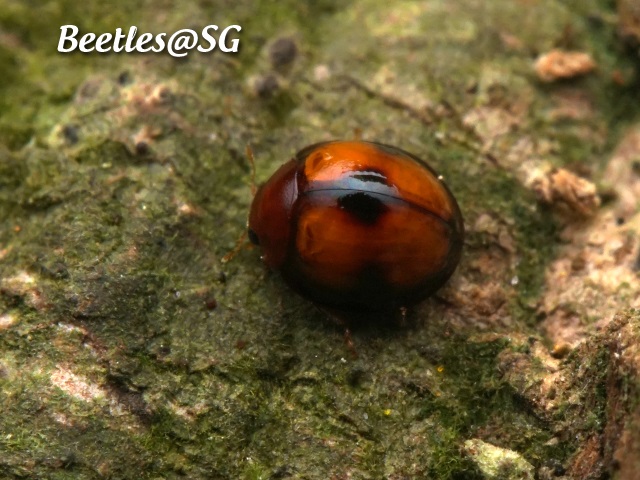 There was quite a number of fallen log and many of them were dry without any fungus growth. On one of the logs was this 10 mm Darkling Beetle (Ceropria superba). 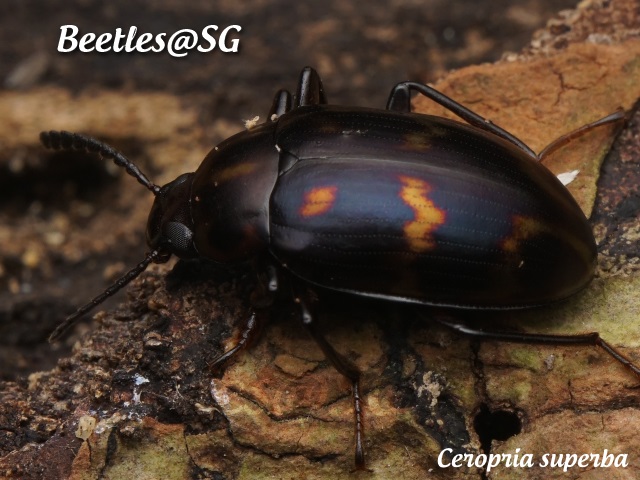 On the same log was a 5 mm black color Ground Beetle that blend perfectly into the black background. 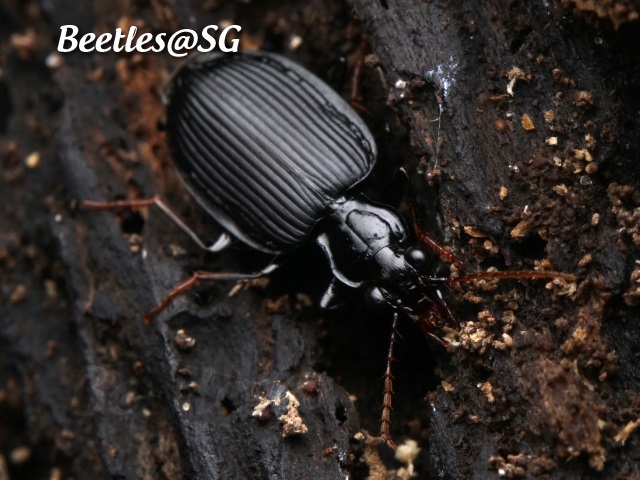 Still on the same log was a small 4 mm Darkling Beetle. 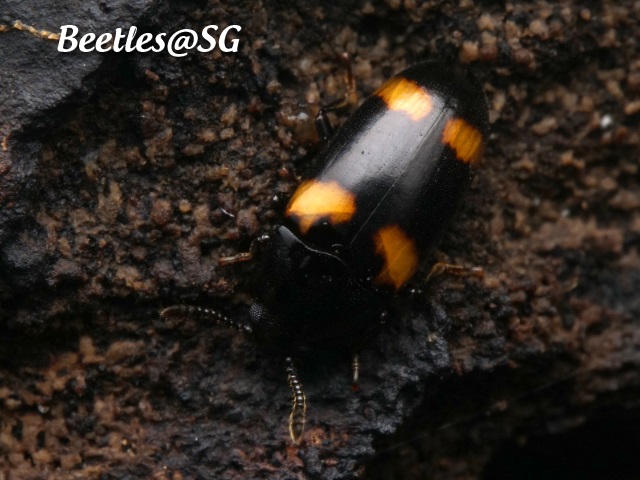 On another fallen log was this 10 mm Fungus Beetle. 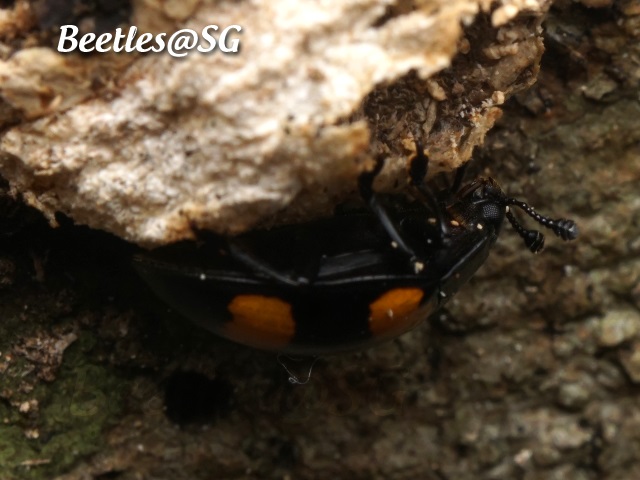 Going further down the trail, there were several sawed logs that lined the path. On one of the logs were several of this 10 mm Darkling Beetle (Ceropria induta). 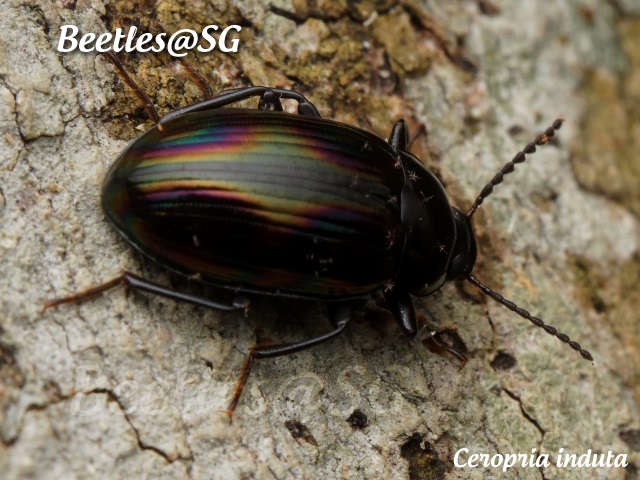 On another log that lined the path was this Ground Beetle (Catascupos dalbertisi). 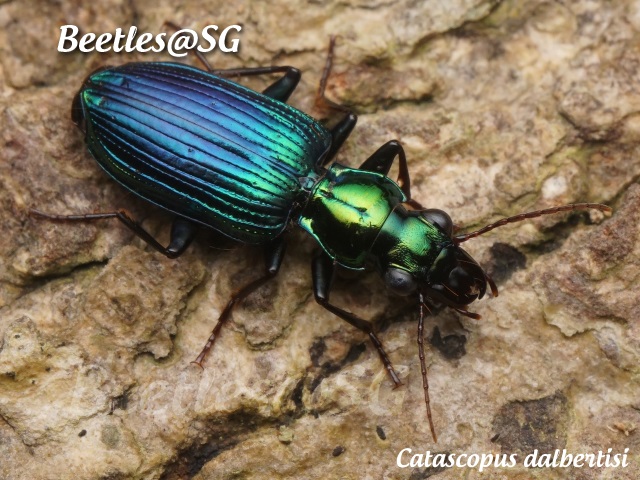 Near the underside of the same log was a 5 mm beetle (Martinezostes sp.) 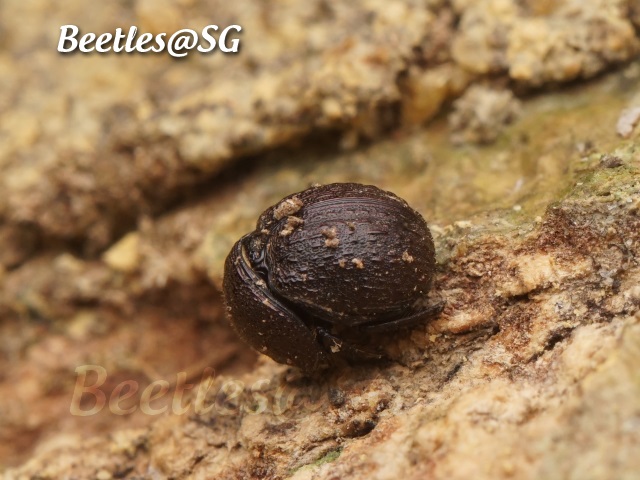 Moving further, there was a 10 mm Ground Beetle. Although the beetle looked like the Ground Beetles that I usually encountered at this place, it is half the size of the similar looking Ground Beetle. Not sure if this is a different type of Ground Beetle or it is because of sexual dimorphism. 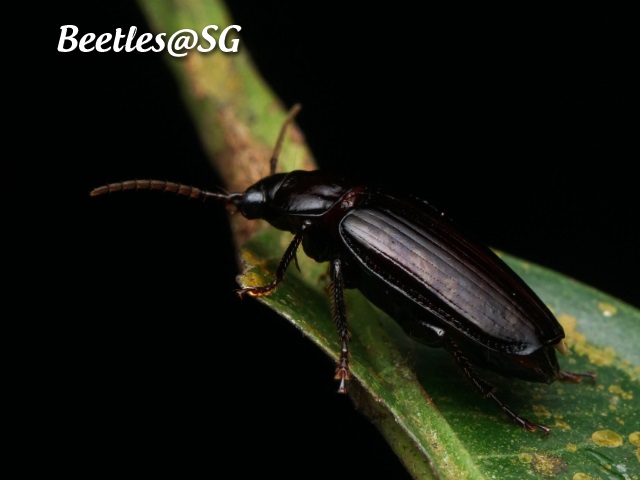 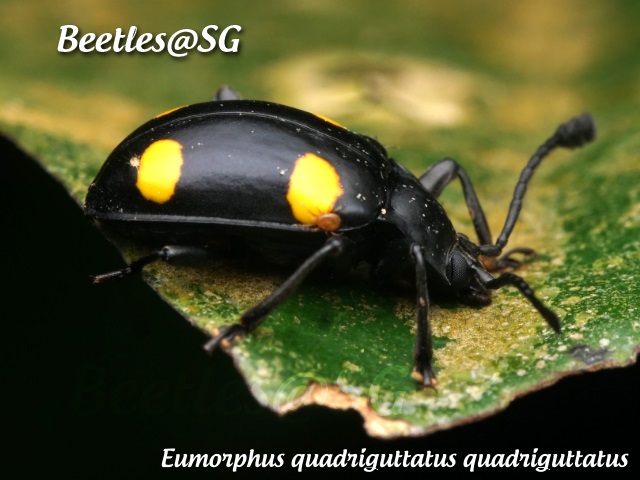 A stone's throw away was this 20 mm Ground Beetle resting on a fern leaf. This is the normal size Ground Beetle that I mentioned earlier on. 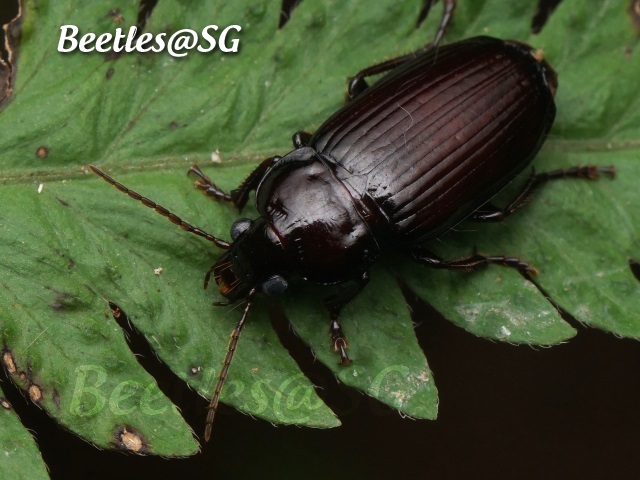 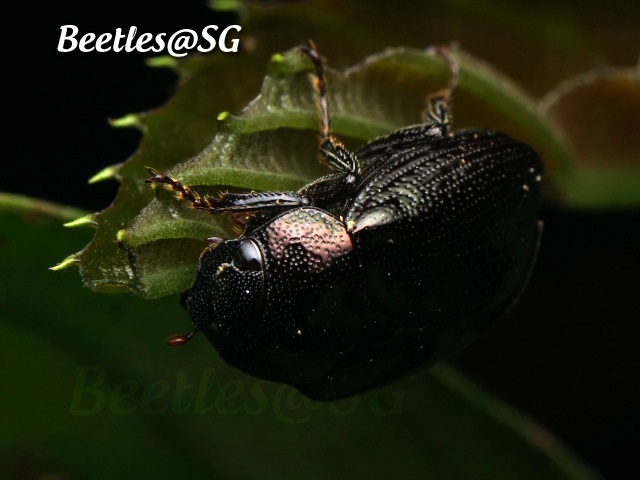 The highlight of the trip was the encounter of this diurnal Leaf Beetle (Hoplosaenidea singaporensis). It has been a while I last encountered this beetle. I especially like the metallic blue coloration of the beetle. 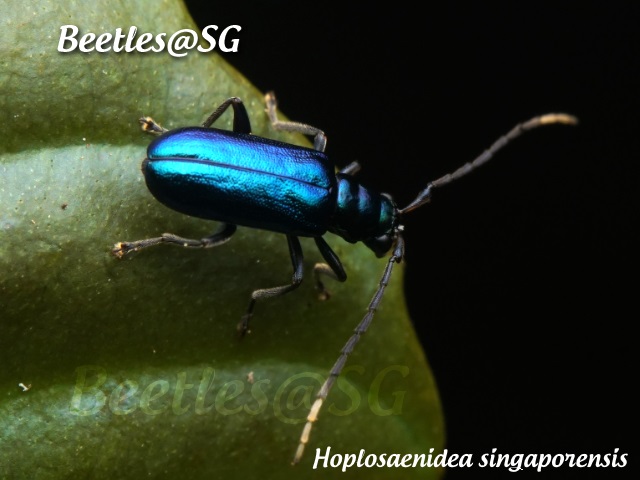 On a leaf nearby was this 20 mm Ground Beetle (Onypterygia longispinis). 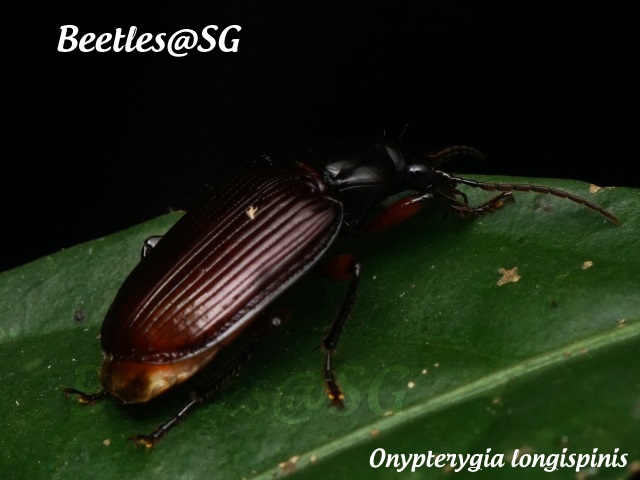 High up on a tree next to the path was this 5 mm roundish Darkling Beetle. 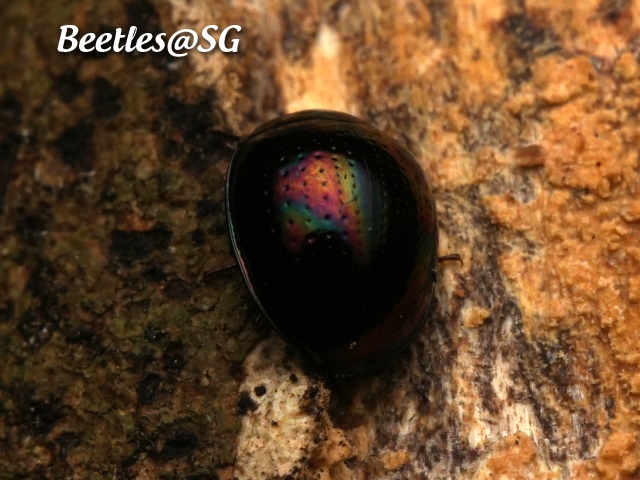 Time passed by quickly and it was time for us to end the trip. Near to the exit was a patch of West Indian Holly (Leea guineensis) where different Chafer Beetles were found. 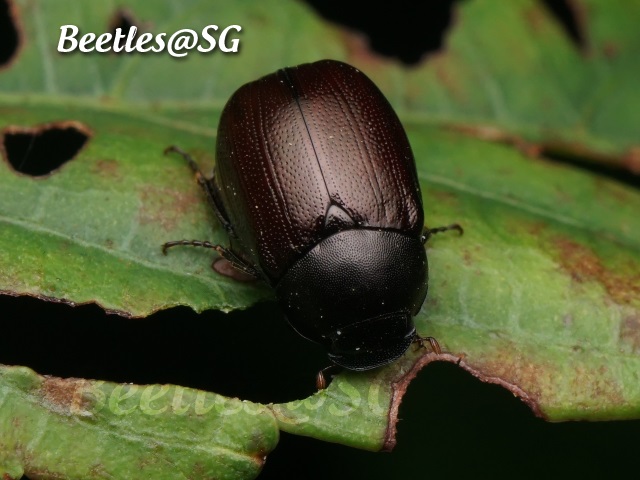 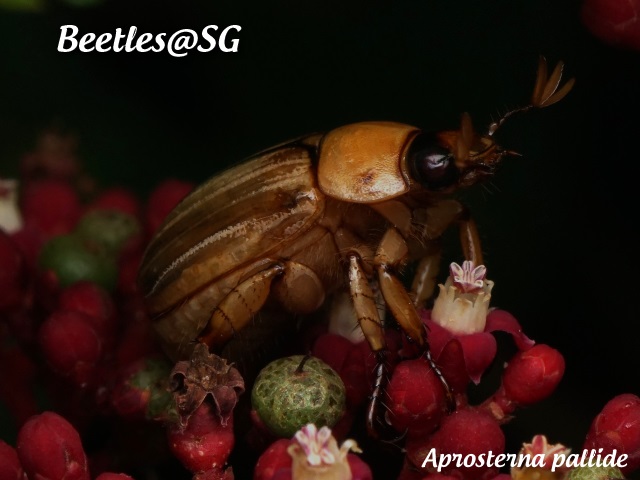 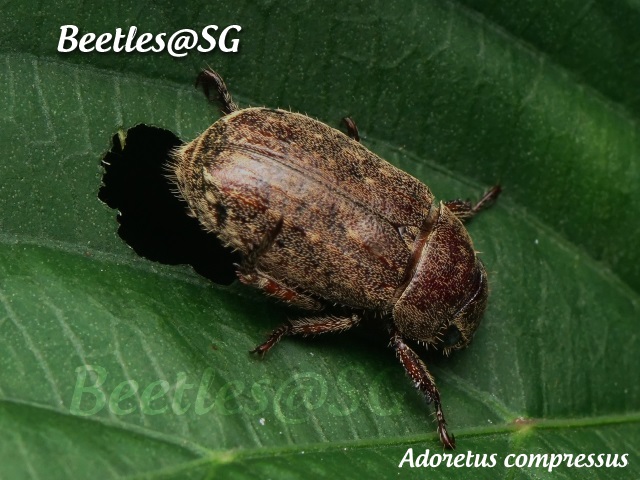 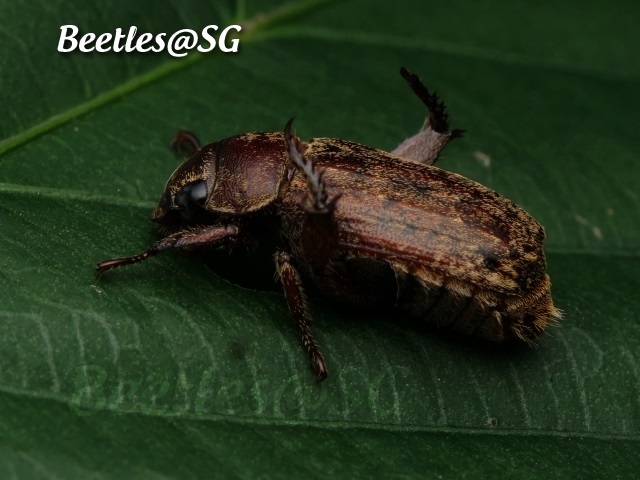 The trip was surprisingly fruitful given the hot and dry weather we are experiencing in Singapore. Windsor Nature Park was indeed a right choice of visit for this trip.