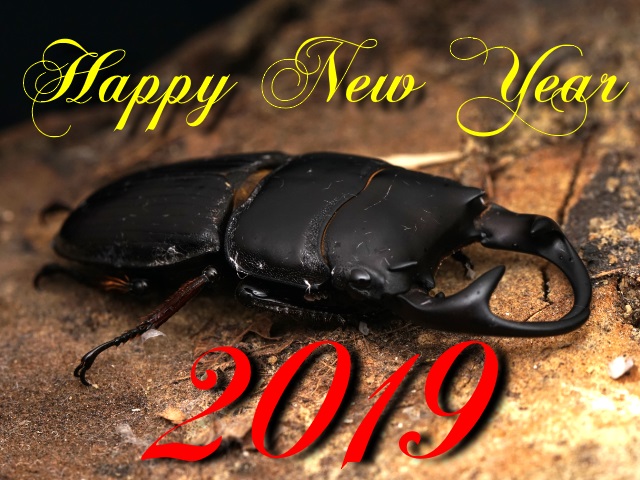 The weather for the past few days have been hot and dry, so HW and I decided to go to Windsor Nature Park as the place has a higher chance of finding beetles regardless of whether it is dry or wet. The place looked bone dry as expected and we are not expecting too much from this trip.

Here's a photograph of a rather short and fat terrestrial flat worm (~25 mm) compared to the long and thin ones that we often encounter. 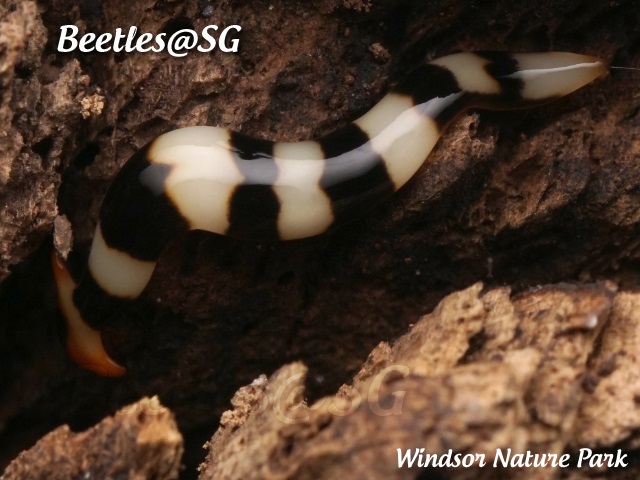 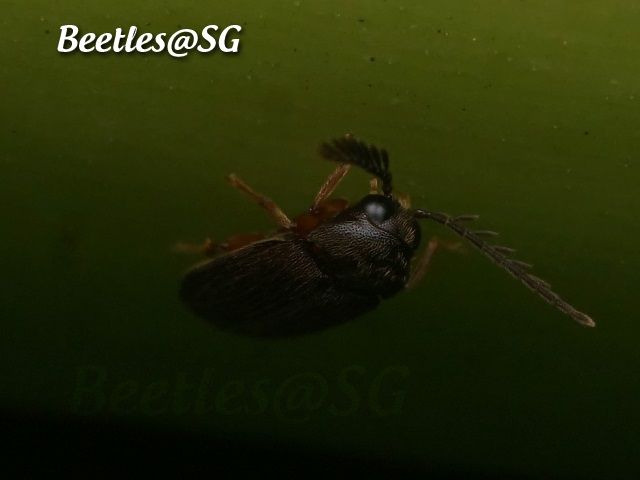 Near to the Toe-winged Beetle was a small tree where this 2 mm Darkling Beetle was found. 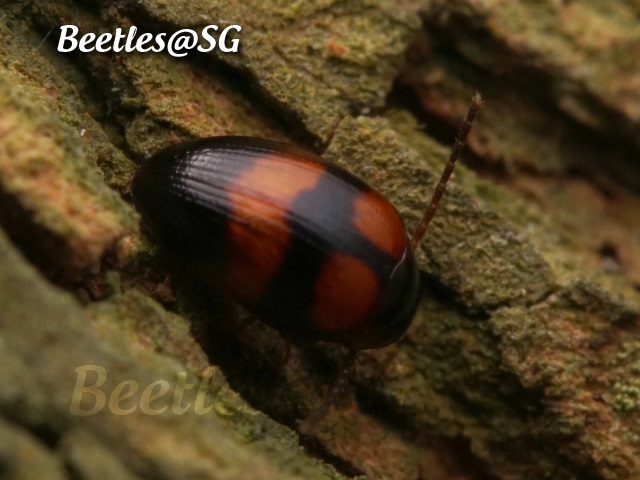 Further down the trail was a fallen log where several of this Rove Beetles were found running around the Bracket Fungus growing on the log. 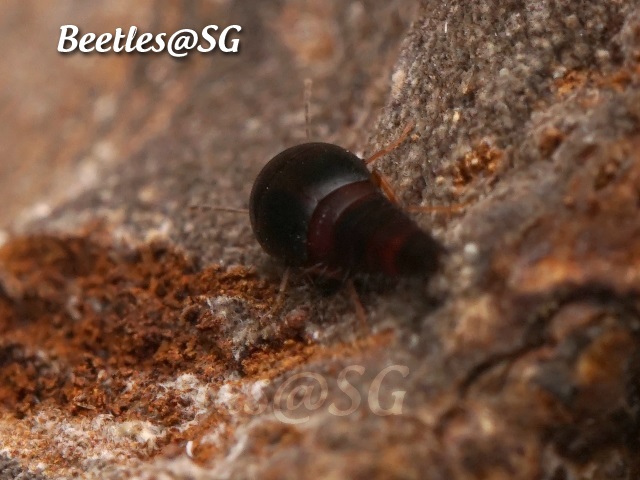 On the same fallen log was a Fungus Beetle (Triplatoma gestroi) hiding in a crevice in the log. 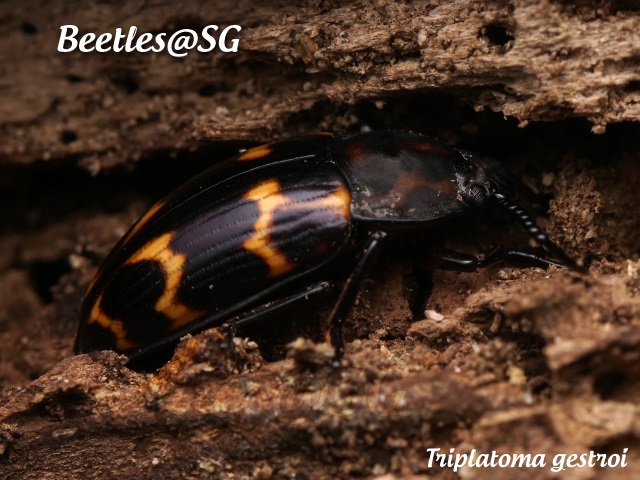 Several centimeters away was a 3 mm Darkling Beetle. 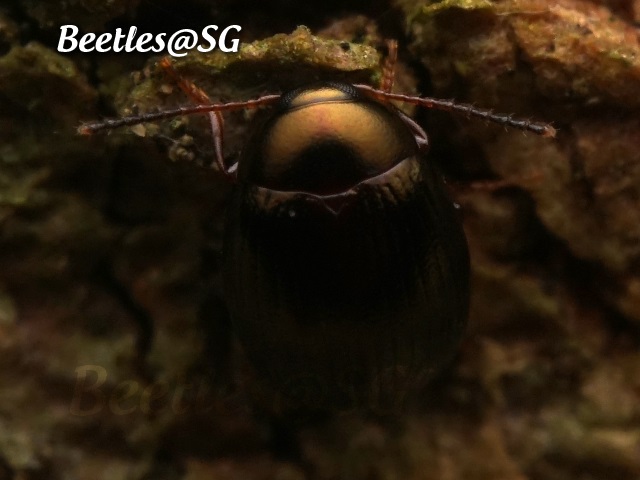 On a tree next to the fallen log was a small tree where this 1 mm Darkling Beetle was found. I always like to photograph these 1 mm beetles as they would always appear as black dots when seen by the naked eyes, but colors and patterns started to appear when you zoom in with the camera. 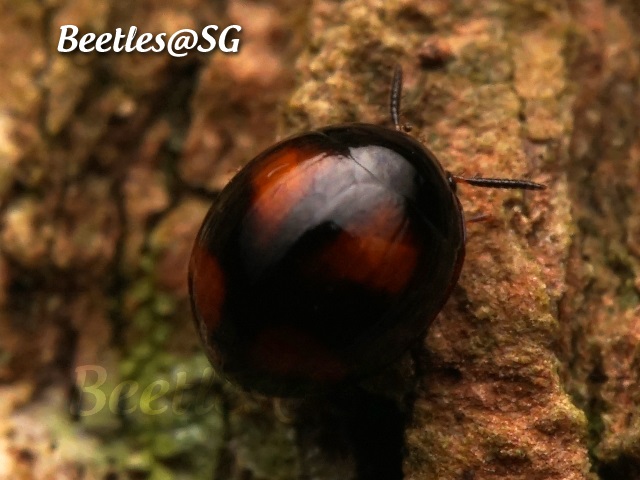 Another 5 mm Darkling Beetle found on the same tree. 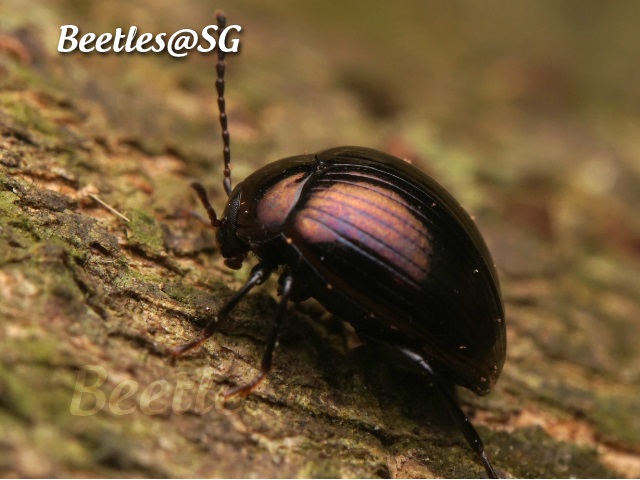 Close by to the Darkling Beetle was a 1 mm Fungus Beetle. 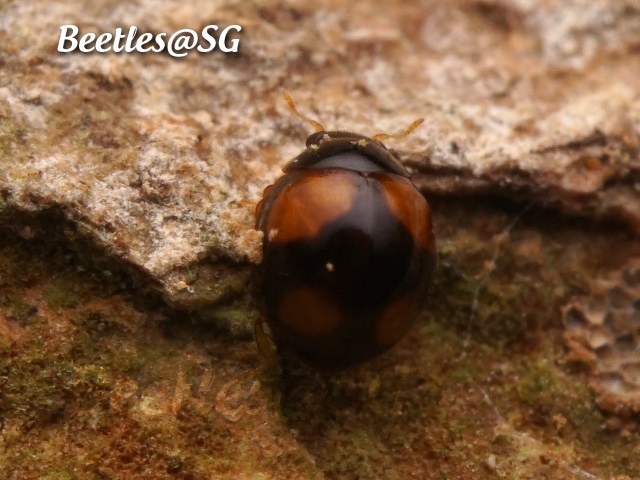 Moving further, we came across another fallen log where several of this 10 mm  Darkling Beetle (Ceropria superba) were found. 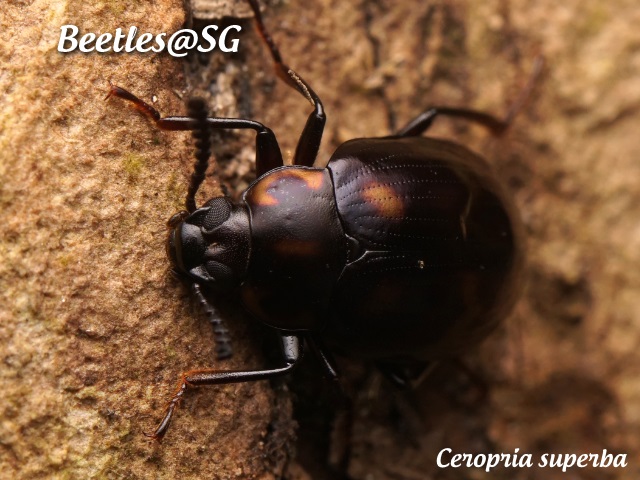 On another part of the fallen log was this lovely Ground Beetle (Catascopus dalbertisi). 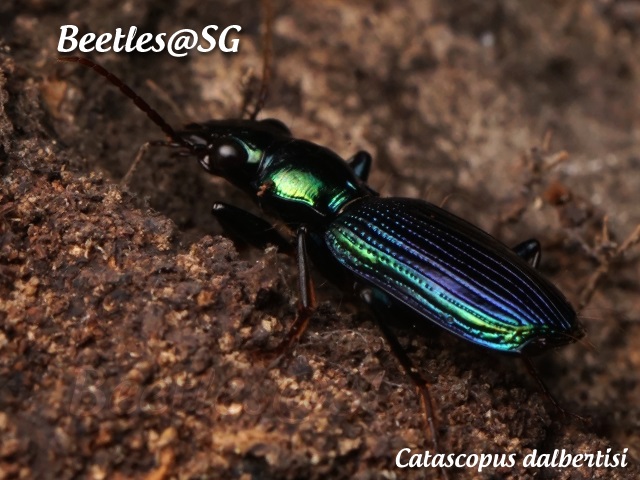 Moving to another fallen log, this 10 mm Darking Beetle probably had seen better days given the punctured elytra. 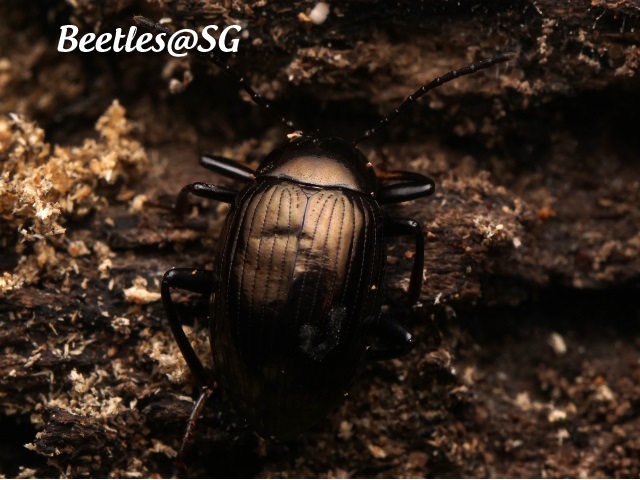 On the same log was this 1 mm Darkling Beetle. 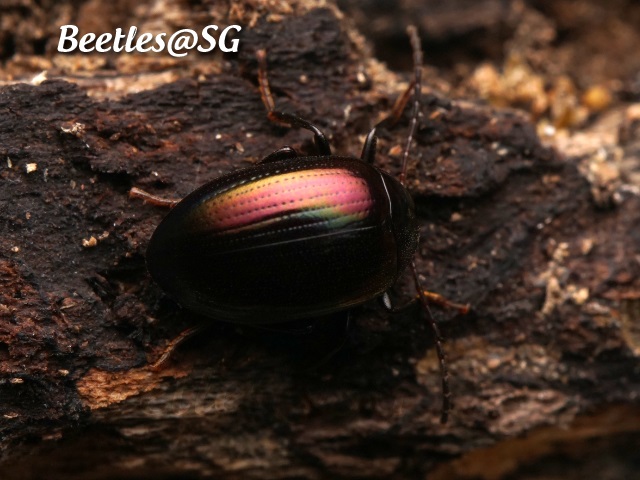 Still on the same log was this 20 mm Fungus Beetle. 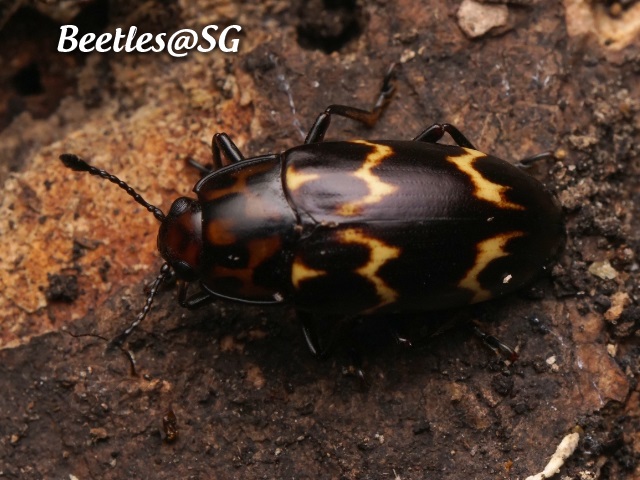 There were not many critters along the sides of the trail, this was probably due to the dry weather. So it was only after searching for a while before I found this Ground Beetle (Onypterygia longispinis) hiding under a leaf. 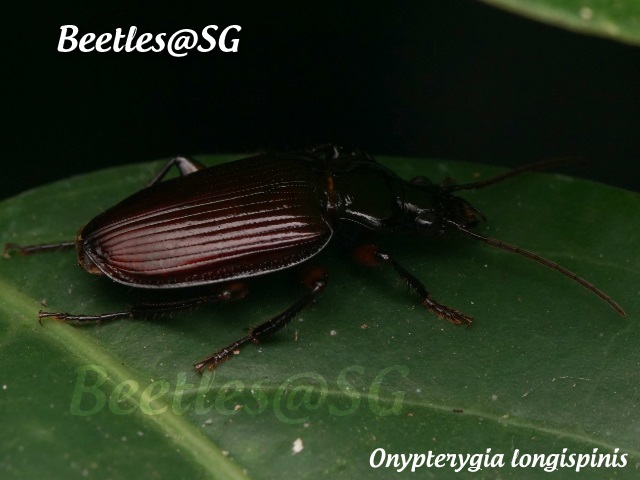 Meters away was this metallic bronze color Chafer Beetle. 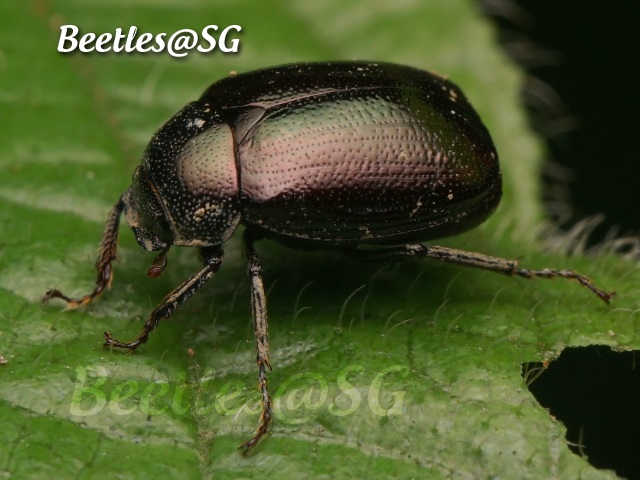 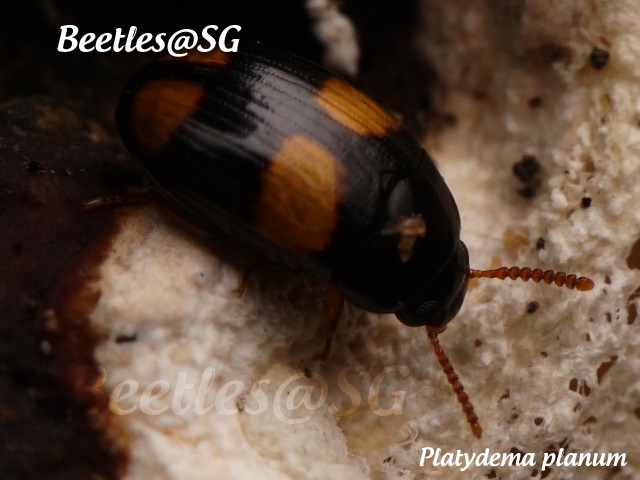 On the same tree was this 5 mm Darkling Beetle. 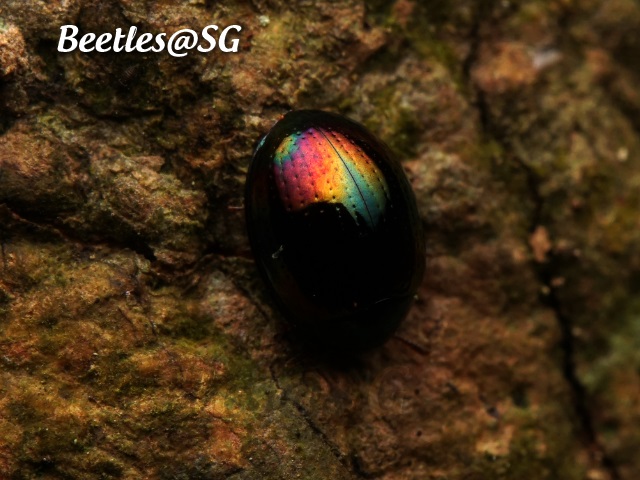 Nearby was this 3 mm Darkling Beetle. 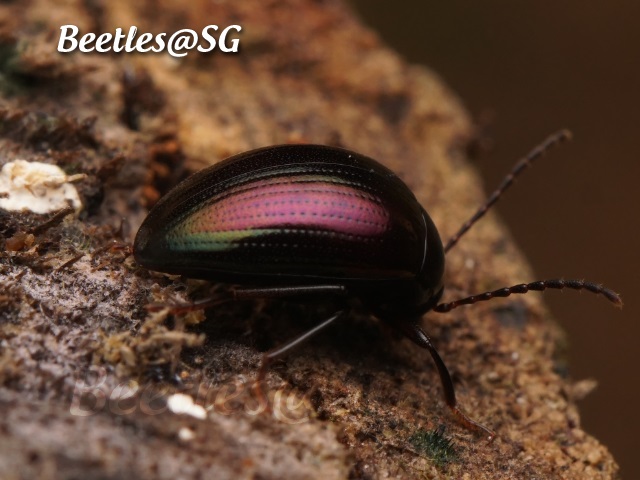 Walking further HW came across a small tree with this beetle larva. 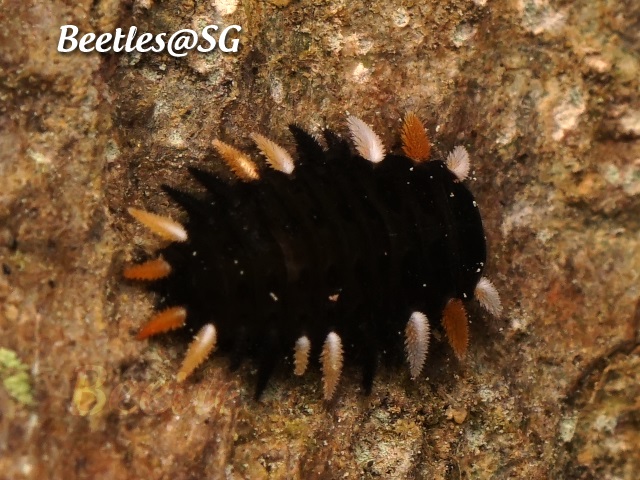 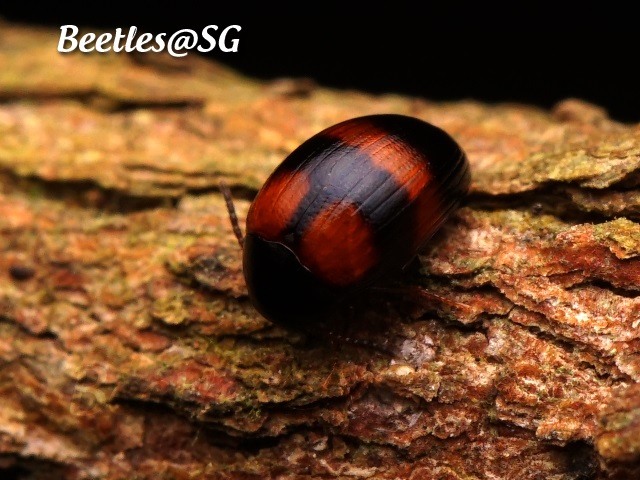 Further down the trail was a lone Tiger Beetle (Cicindela aurulenta). This is the most commonly encountered Tiger Beetle in our parks and nature reserves. 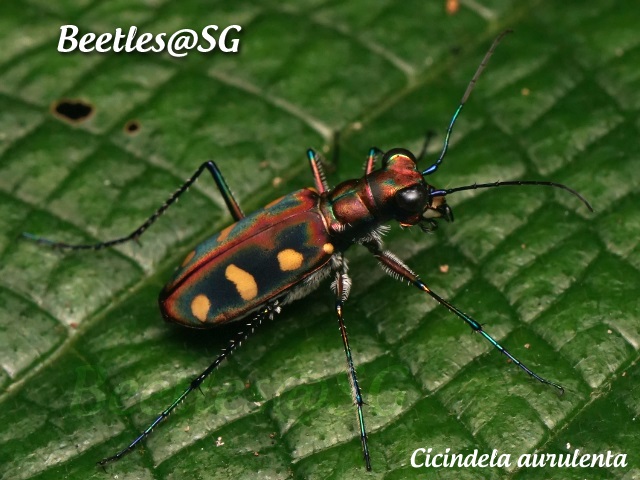 Near to the Tiger Beetle was a 20 mm Ground Beetle resting on a leaf. 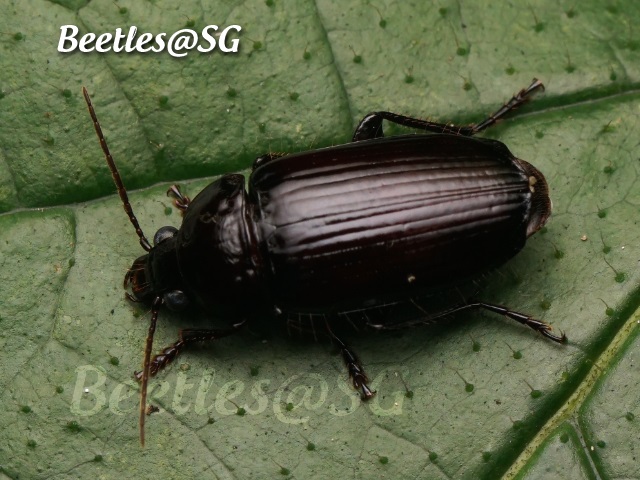 The last beetle for the trip was a 3 mm Darkling Beetle, commonly found on small trees at night. 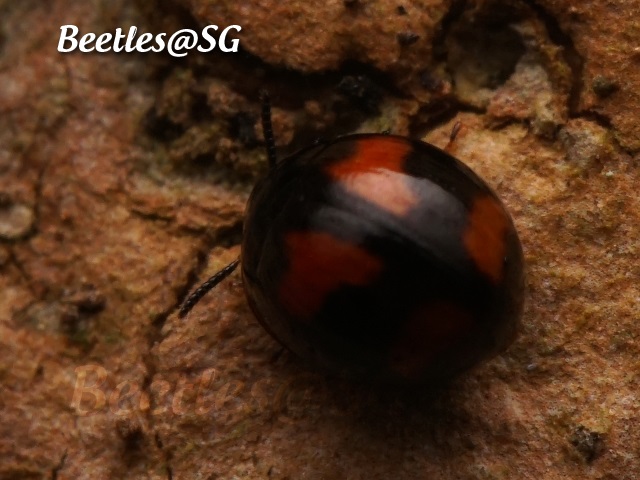 This trip has nothing to shout about, but given the not so ideal weather during this period of monsoon, the trip is still consider to be fruitful.