During the trip, I came across this 20 mm large Tree Hopper found on a small tree. 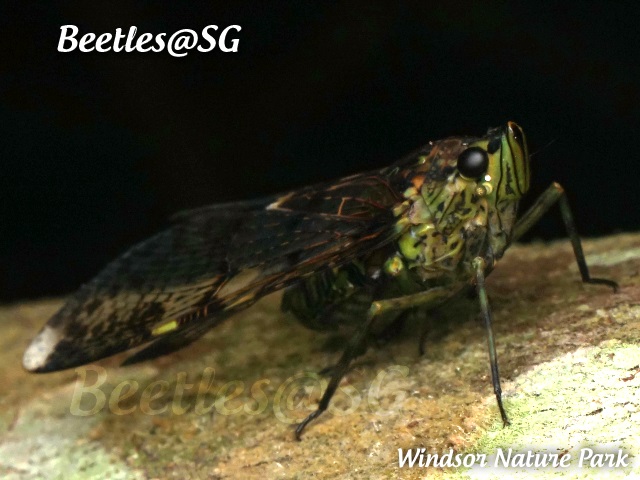 The first beetle for the trip was a Long Horned Beetle (Coptops annulipes) found on a fallen log that lined the reforestation area at the entrance to the trail. 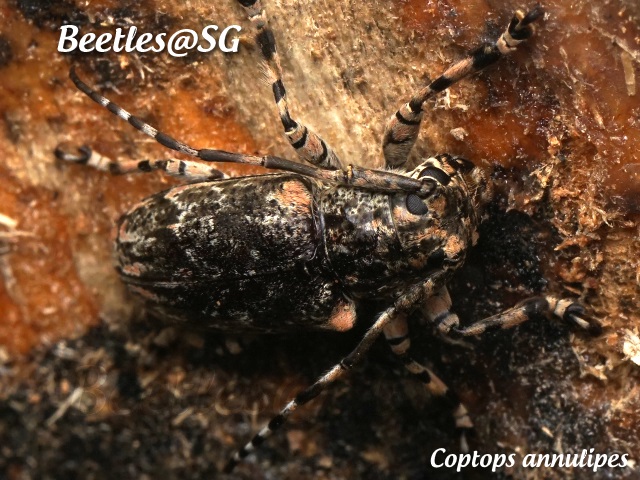 A stone's throw from the Long Horned Beetle was a 4 mm Leaf Beetle (Hemipyxis semiviridis). 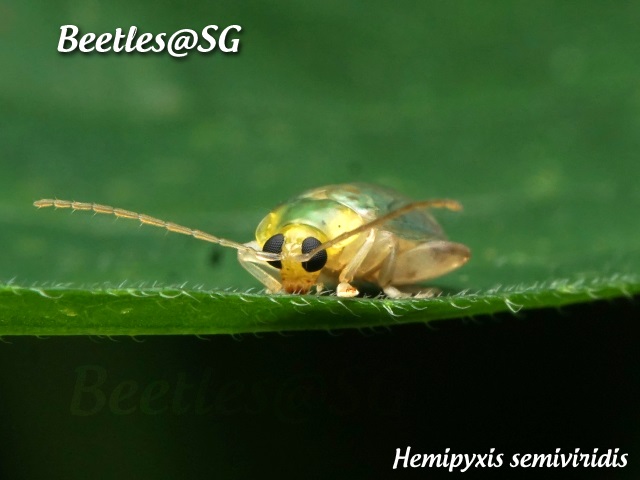 On a fallen tree near by was a colony of commonly encountered Darkling Beetles. 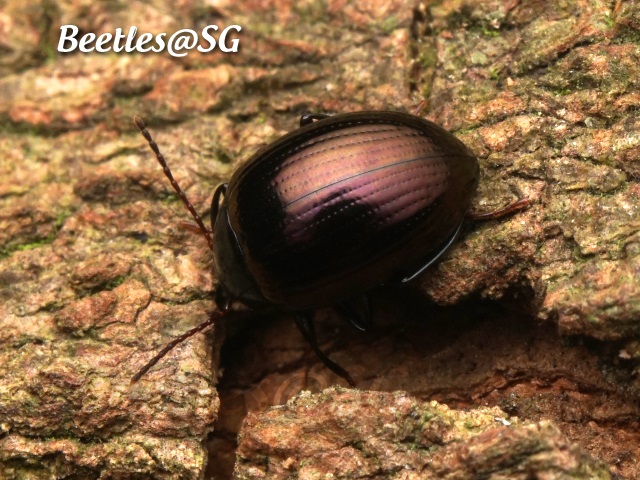 On a small tree next to the fallen log was a pair of 2 mm Darkling Beetles. 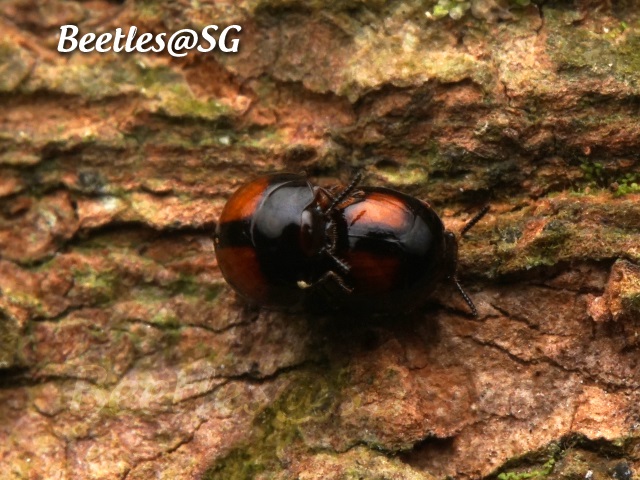 At the base of the small tree was a beetle larva. 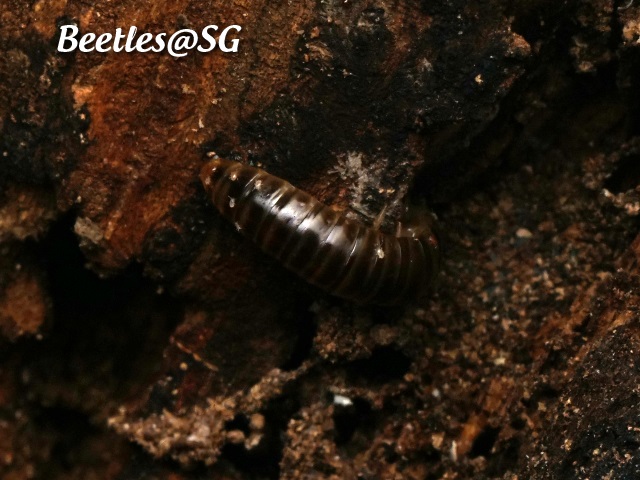 While walking down the trail, a Chafer Beetle flew by and landed on my jeans. 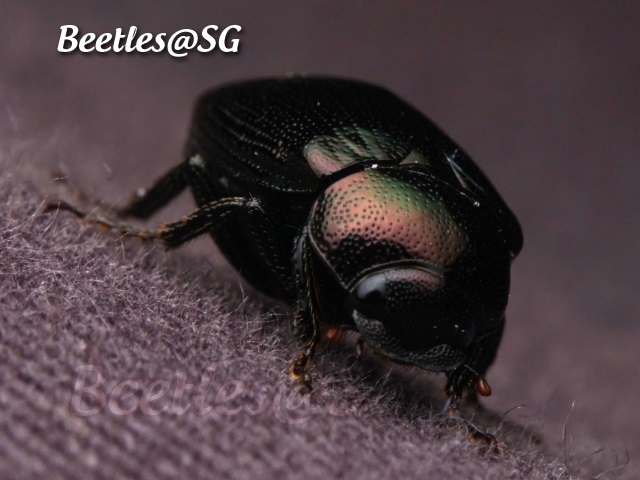 Walking further down the trail, I came across a small fallen log with several of this Fungus Weevil (Eucorynus crassicornis). 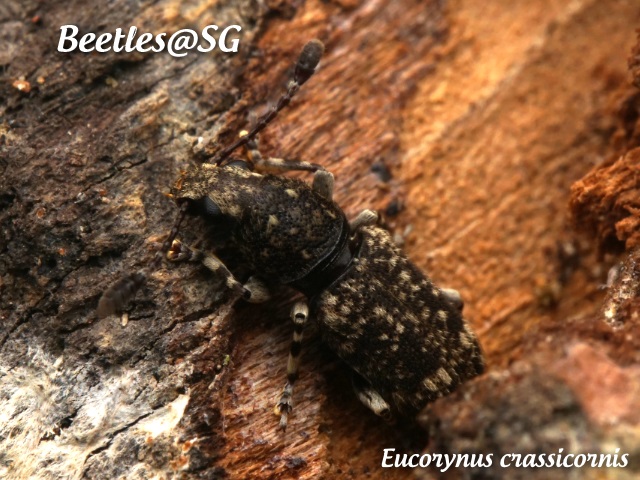 Not too far from the Fungus Weevil was a colony of this 8 mm Darkling Beetles (Ceropria induta). 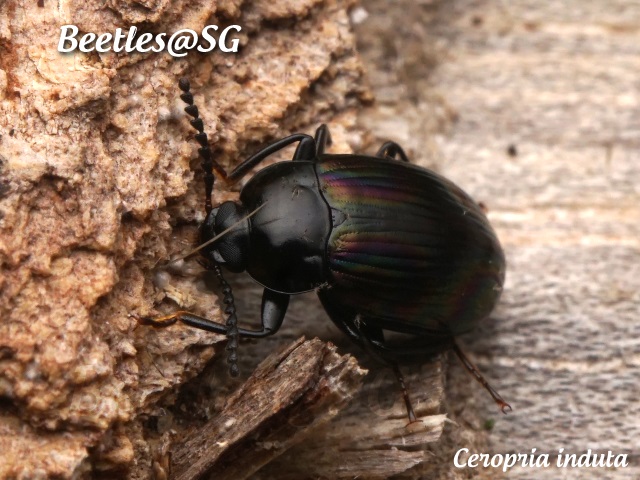 On the same log was this lovely 3 mm Darkling Beetle. 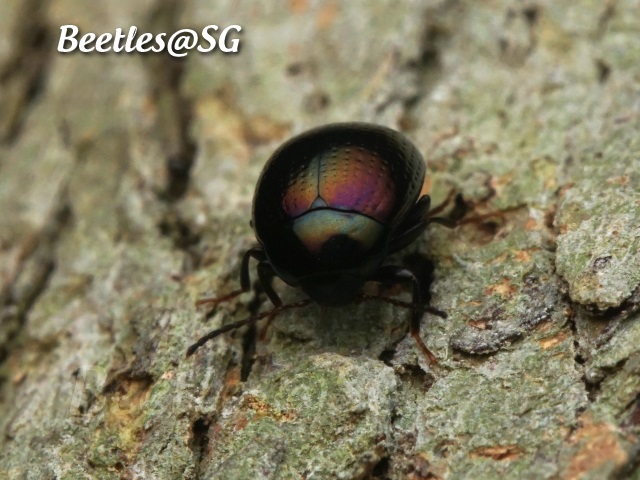 The number of fallen logs at Windsor Nature Park seemed to have increased a fair bit, hopefully not because of diseases. On one of the fallen logs was this 10 mm Darkling Beetle. 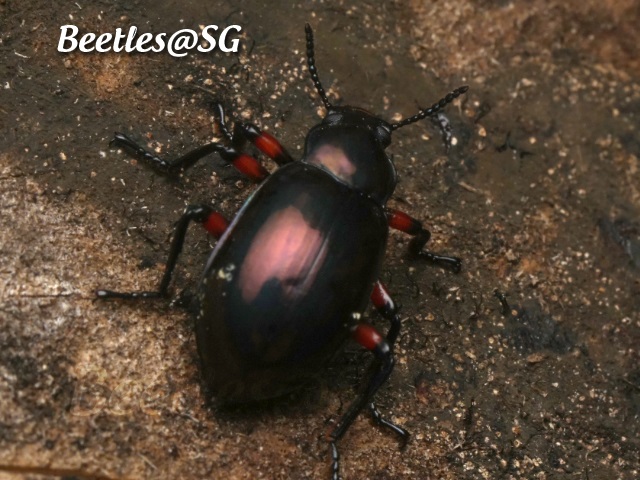 On the same log was one of my favourite Ground Beetle (Catascopus dalbertisi). 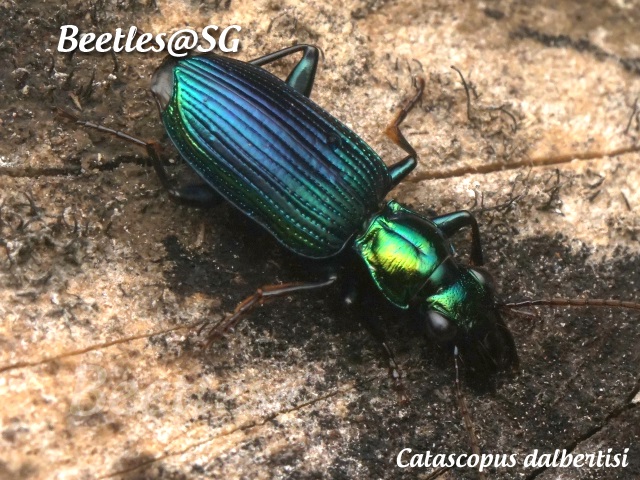 At the base of a nearby tree was this 3 mm Fungus Weevil. 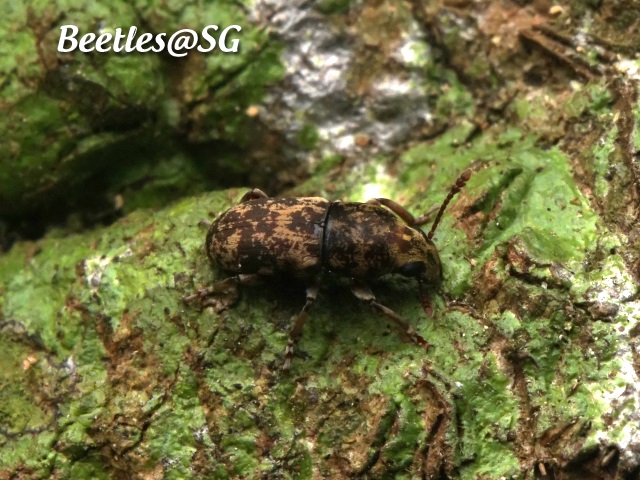 On the same tree was this 2 mm unknown beetle. 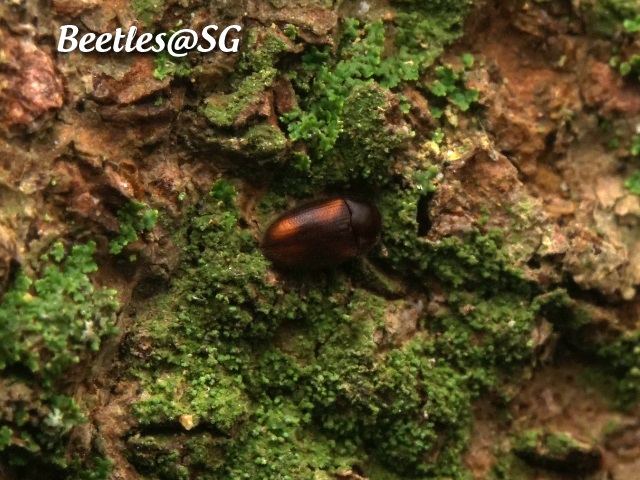 Near to the unknown beetle was a 1 mm Darkling Beetle. 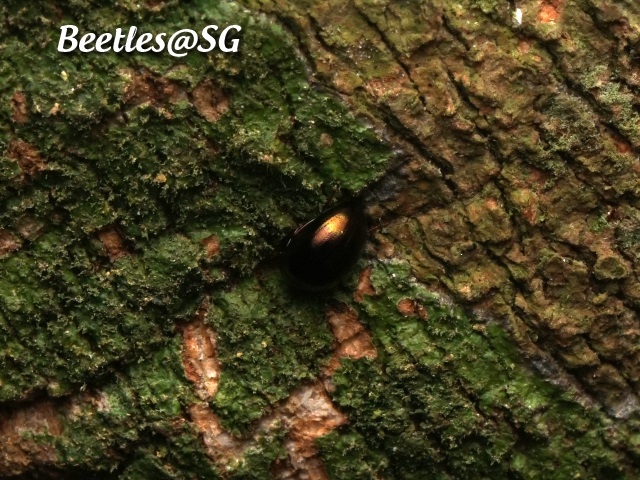 On another tree nearby was this 5 mm greyish color Darkling Beetle. 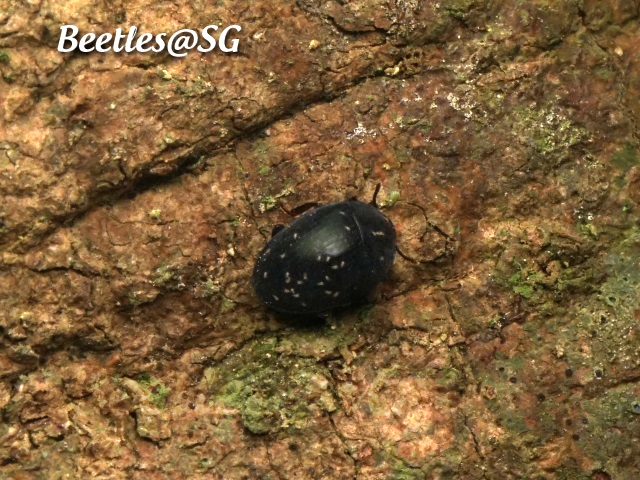 At the base of another tree was this 3 mm Ground Beetle (Minuthodes multisetosa) actively running around. 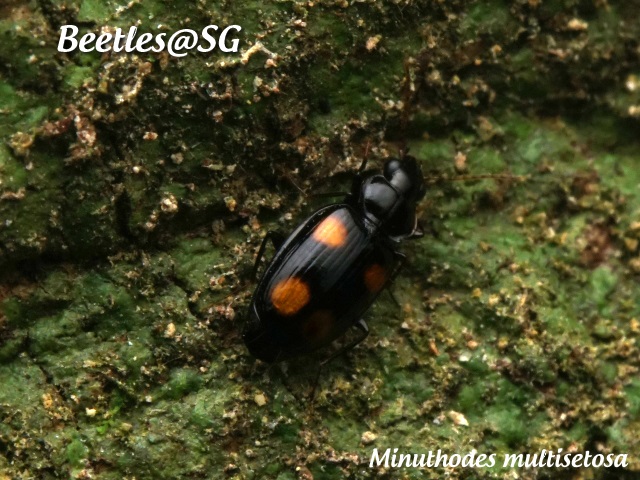 On a tree stump next to the trail was this 15 mm Fungus Beetle (Triplatoma gestroi). 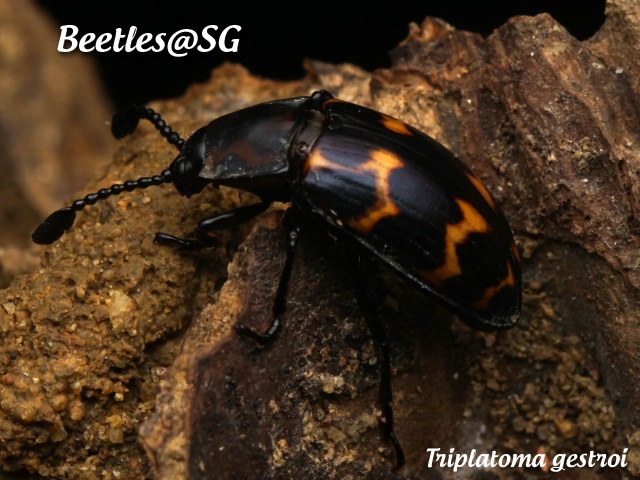 On the tree stump were also several of this Darkling Beetle (Ceropria superba). 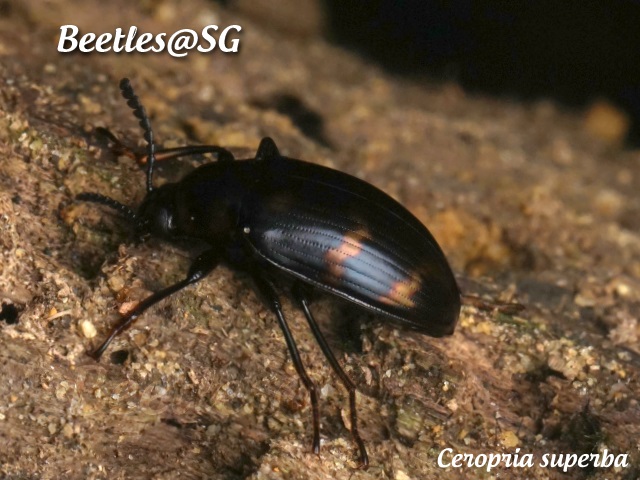 On a branch of a tall bush was this lone 5 mm Darkling Beetle. 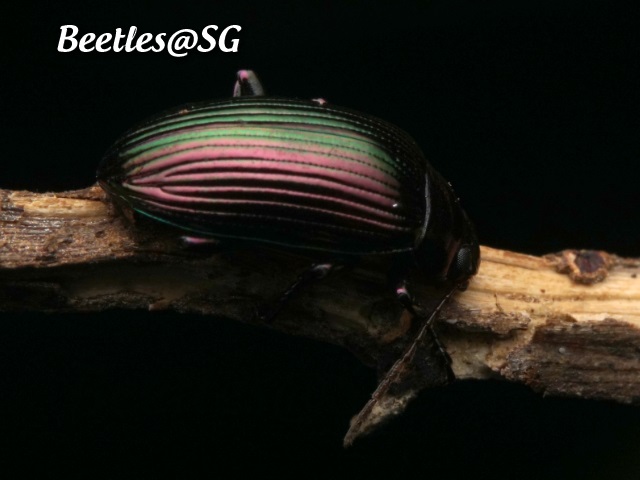 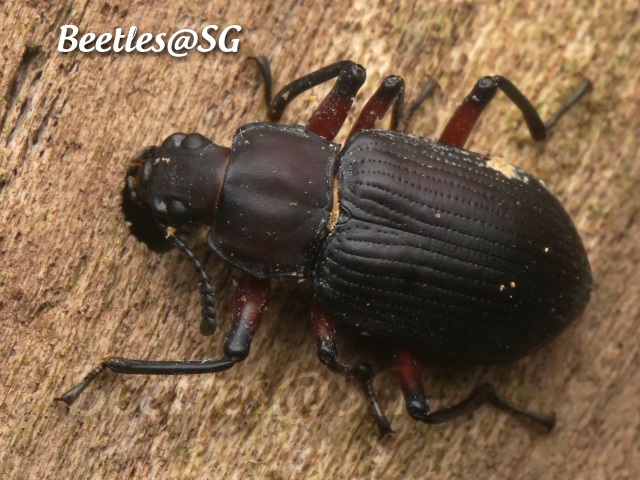 On the same log was this 3 mm Fungus Beetle. 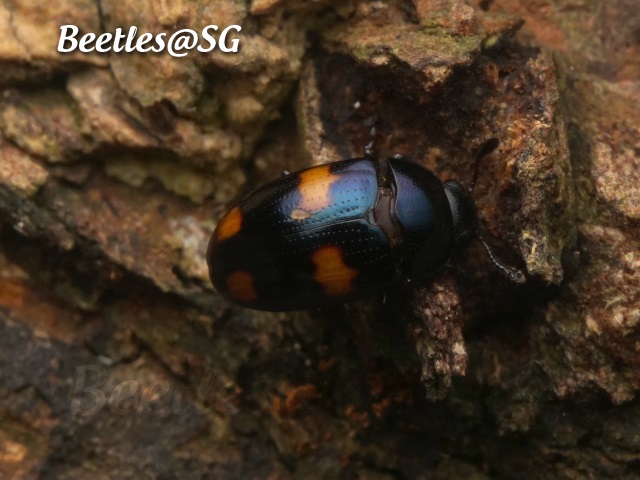 The last beetle for the trip was a 3 mm Ground Beetle found at the base of a medium size tree. 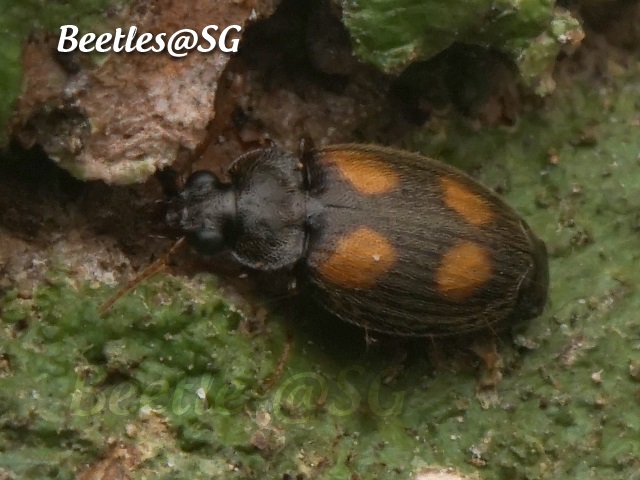 The trip was unexpectedly fruitful as I was not expecting to find many beetles due to the rain and haze. Nevertheless Windsor Nature Park once again proved to be the best location to find beetles regardless of the weather.
Posted by David Moh at 09:19