It rained cats and dogs in the whole afternoon, and so I decided to go to Venus Drive instead of the original plan of Dairy Farm Nature Reserve, given the higher chance of finding beetles during wet weather there.

The place was soaking wet as expected. Interestingly, there was also an abundance of  terrestrial flatworms and snails. Here's a photograph of a snail crawling on a tree branch. This is the first time I tried back-lit photography and I found it interesting. I will probably try it more often in the future. 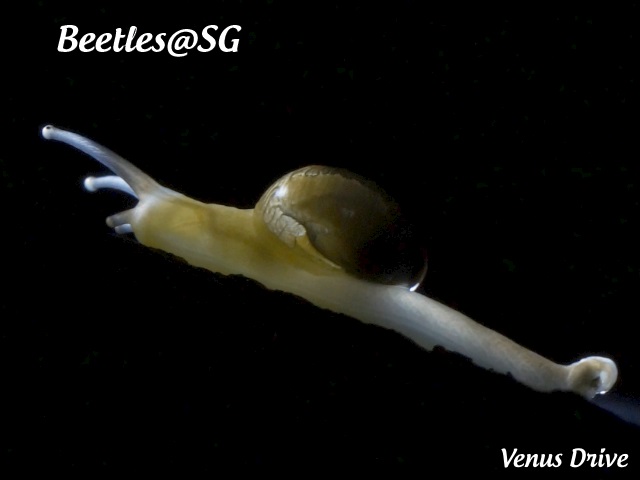 The first beetle was a small 2 mm first-time-encountered Darkling Beetle. 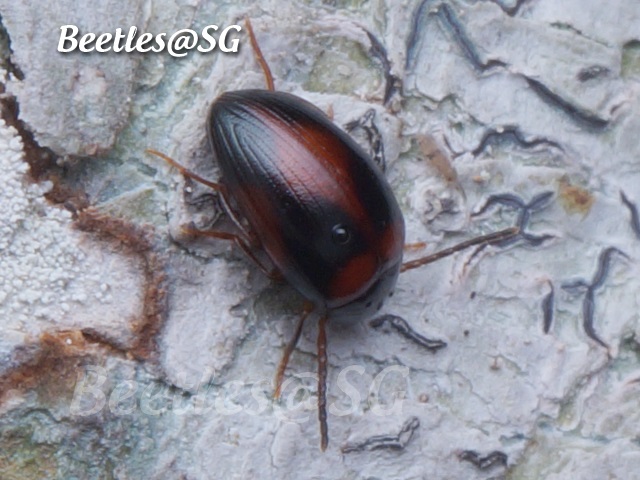 On a tree nearby was a small 3 mm Darkling Beetle. 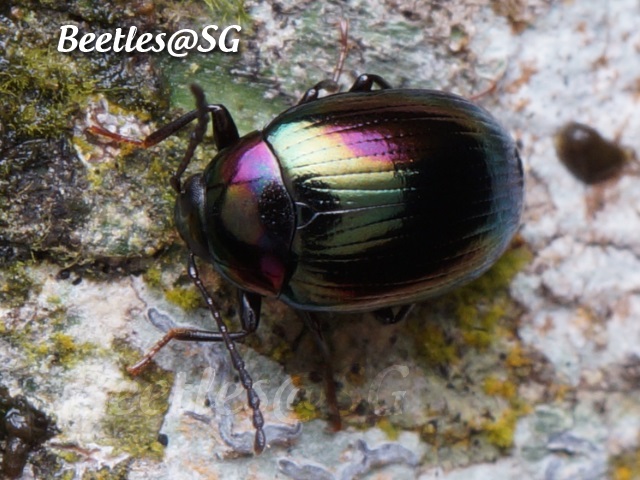 Another small 3 mm Darkling Beetle was found on the same tree. 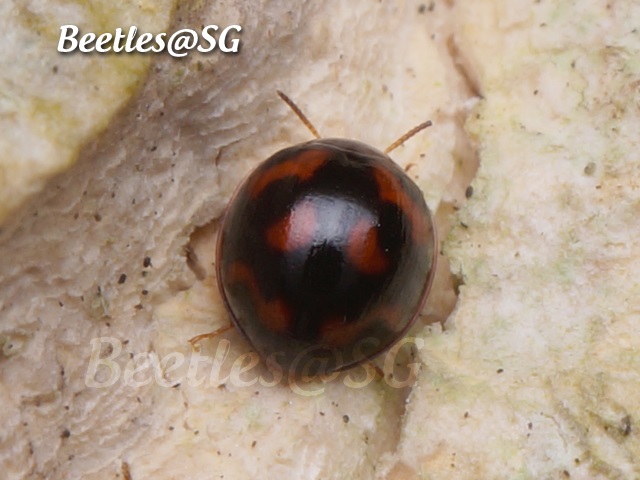 The first beetle encountered in the trail was a commonly encountered Chafer Beetle (Apogonia expeditionis) feasting on a leaf. 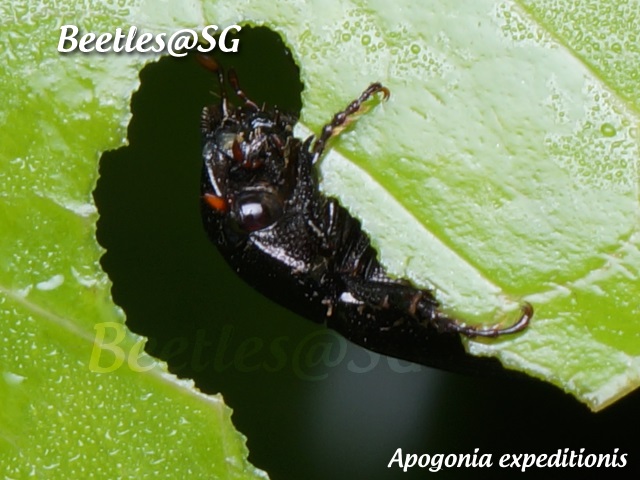 The next beetle on the trail was a small 5 mm Fungus Weevil on a small tree. 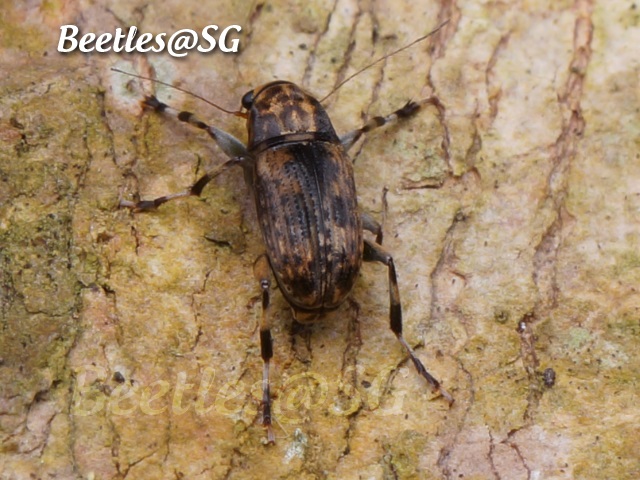 On a nearby tree was a small 3 mm Darkling Beetle. 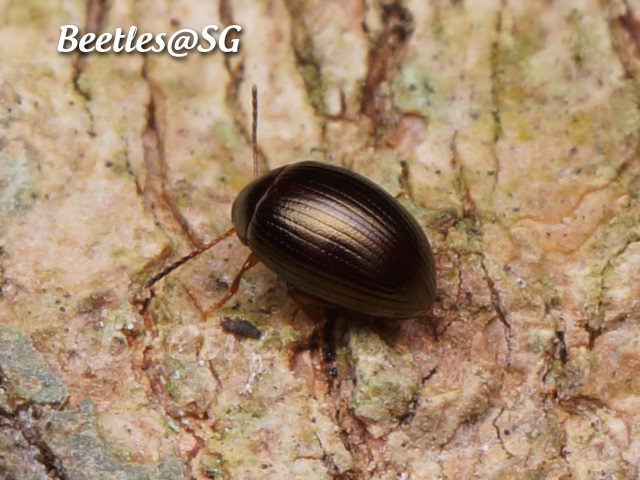 There was nothing much to see  until I reached a wet woodpile and found this Fungus Beetle (Ceropria superba). 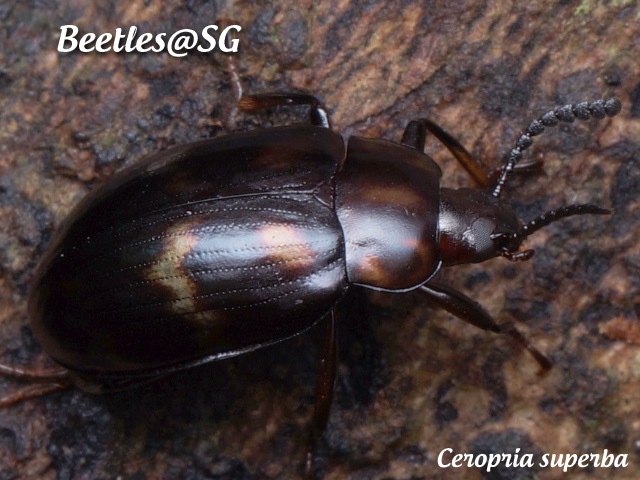 More walking without finding any beetles until this 15 mm beetle found taking shelter under another larger leaf. 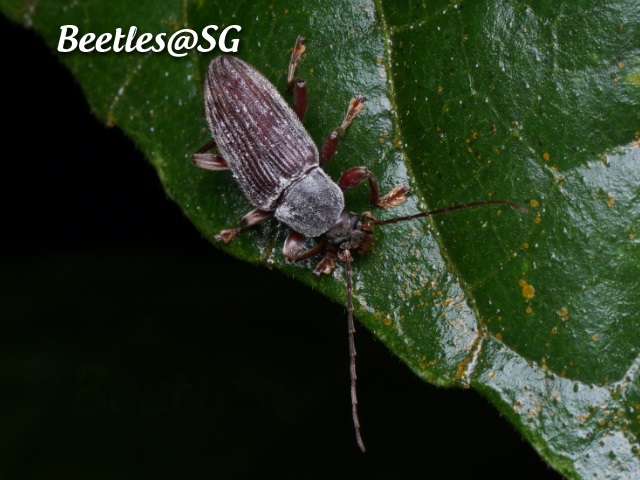 More walking until finding this 5 mm Darkling Beetle on a tree. 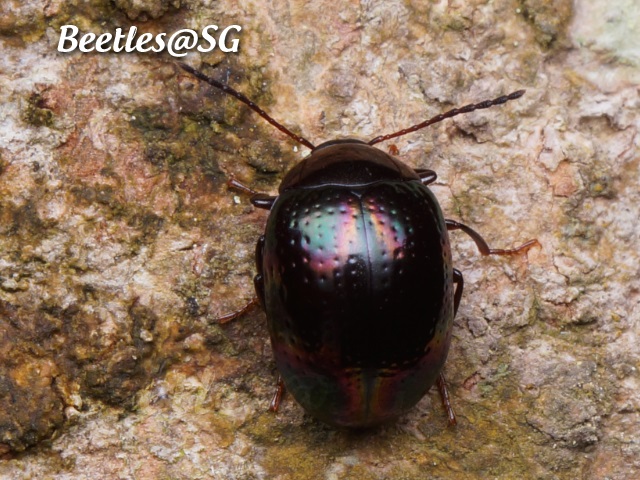 A stone's throw away was another Darkling Beetle with deep purple elytra. 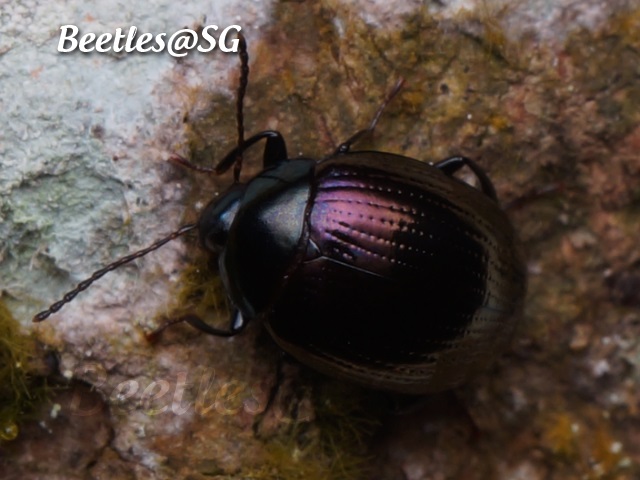 On the same tree was a tiny (<2 mm) Fungus Weevil. It looked very much like a small black dot until I zoomed in with my camera to see the lovely pattern on the beetle. 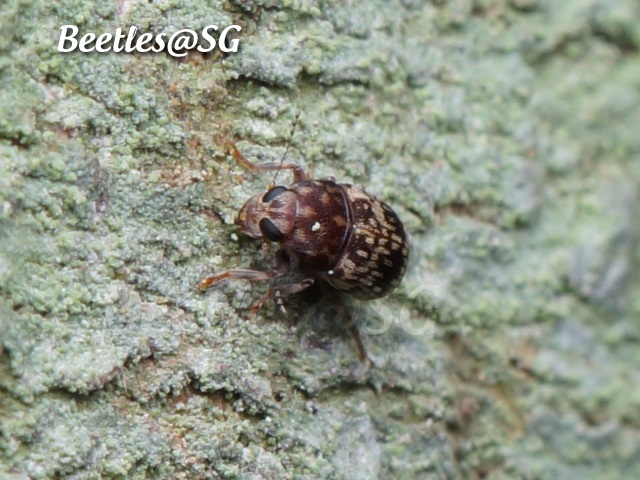 Moving further down the trail, a tiny 2 mm beetle was found moving actively on a tree. 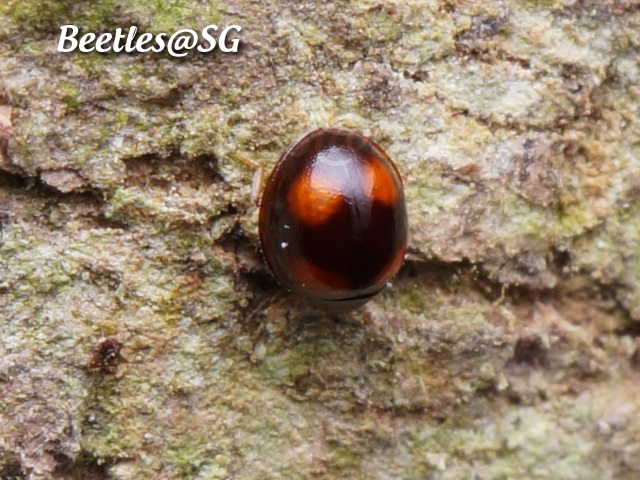 Just around the area of the tiny beetle were several Tiger Beetle (Cicindela aurulenta) resting on a wet leaf. 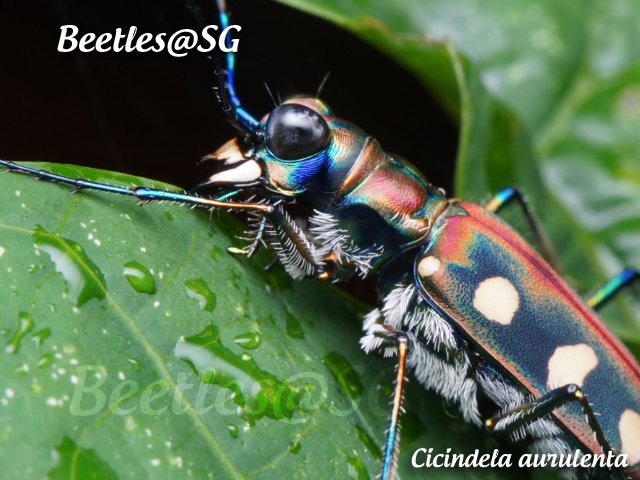 Coming to another woodpile, I was glad to be able to find this 10 mm Darkling Beetle. 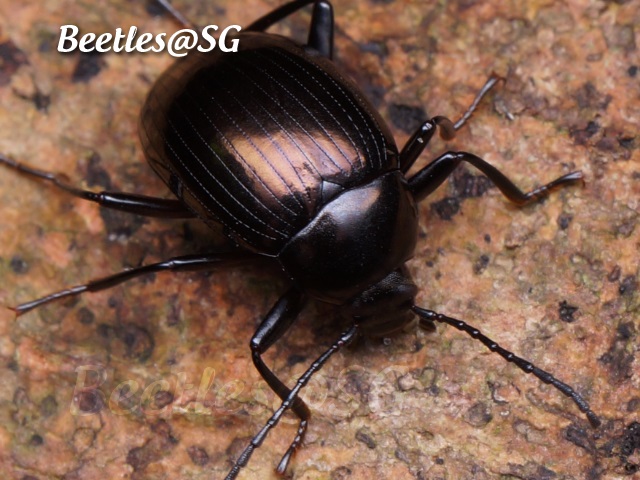 There was a small dead standing tree nearby where this small 5 mm Ground Beetle (Minuthodes multisetosa), moving actively on its trunk. 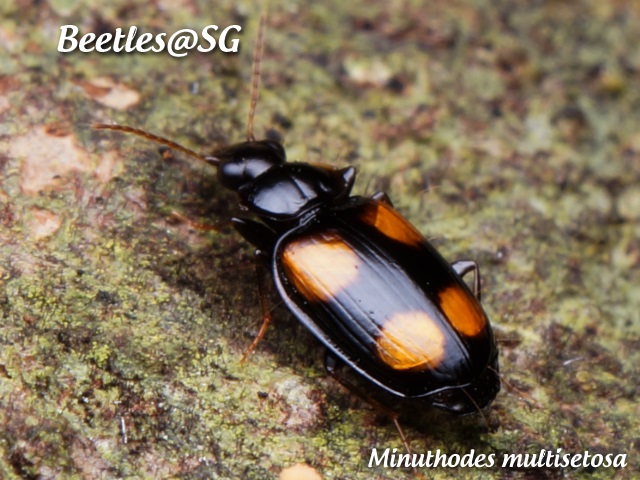 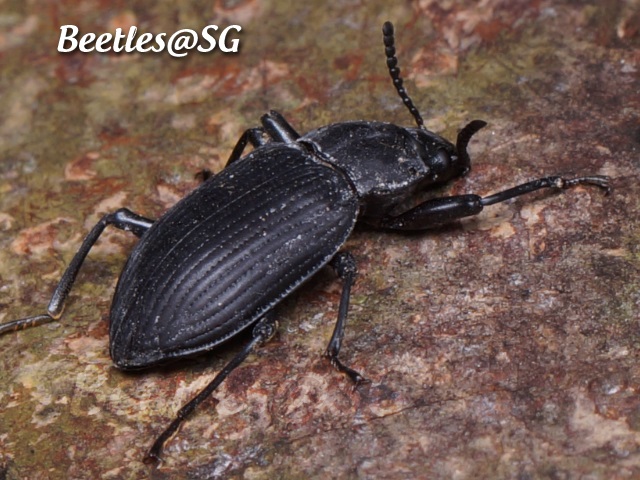 The highlight of the trip was this Fungus Beetle (Eumorphus assamensis). It has been a while that I last encountered this once commonly encountered beetle. 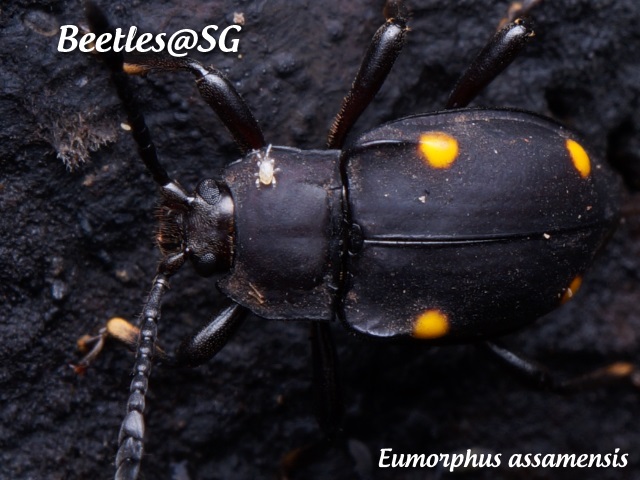 Near to the Fungus Beetle was a Darkling Beetle (Ceropria induta) on a small tree stump. 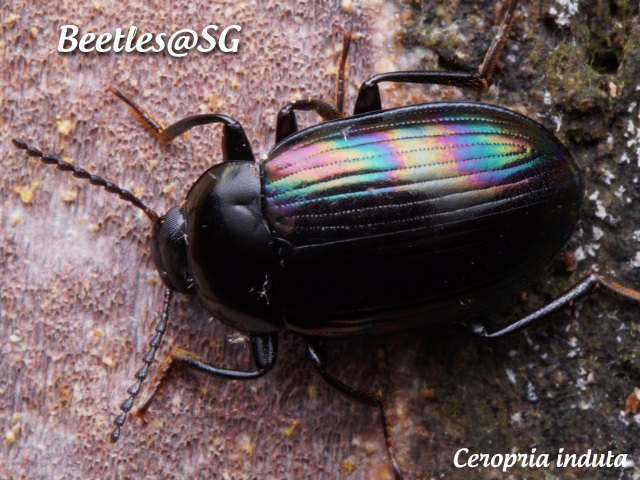 It was such a coincidence that the trip ended with another first-time-encountered 2 mm Fungus Beetle on some rotting tree branch. 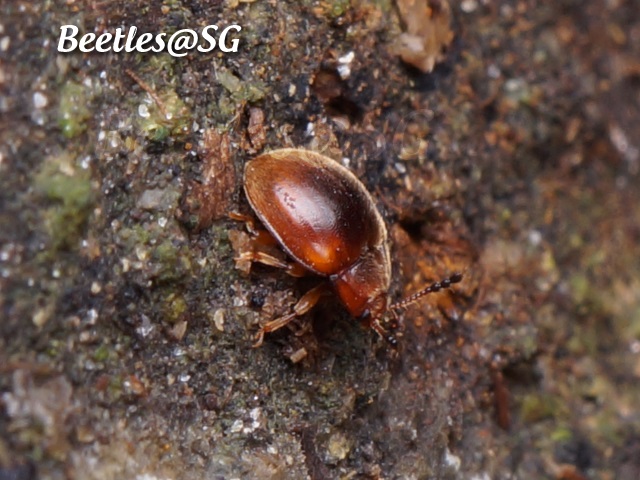 Compared to the previous few weeks of wet-weather trips, this trip would considered fruitful given that I still managed to find two first-time-encountered beetles despite the wet weather. This also confirmed my thought that Venus Drive trail is the best place to find beetles even during wet weather.